First, a point of clarification. I write blog posts with the ideal blog reader in mind. The ideal blog reader being me. And what I have noticed over the years is, despite the interest in the subject matter, it is rare that a blog post will hold my attention longer than a few paragraphs. This is why Tattoosday posts are generally brief, not drawn out, and some times split into multiple parts.

Similarly, my attempts at literary criticism are not as in-depth as many may like. I acknowledge that shortcoming while noting, for many, this is actually a plus.

That said, I am long overdue in reviewing Tattoo Machine: Tall Tales, True Stories, and My Life in Ink by Jeff Johnson. 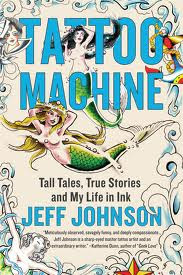 Johnson is a tattoo artist and owner of the Sea Tramp Tattoo Company in Portland, Oregon.

As anyone in America can tell you, the rise in popularity of the art of tattooing has skyrocketed in the last twenty years, and the first decade of the 21st century has seen the acceptance of body art increase exponentially.

Johnson's book is not your typical tattoo primer (the fanciest of which has been Kat Von D's immensely successful High Voltage), but rather, a memoir of his life and experiences as a tattoo artist.

What separates Johnson from other tattoo writers is that he has a true gift for prose, a writing skill that eclipses the efforts of your standard "all about tattooing" books. As a result, the reader is sitting there in the shop with Jeff, listening to his story. I could hear the buzzing of machines and taste the neon in the air.

Case in point, a paragraph from Johnson's introduction:

"This isn't simply a memoir. It is also a personal look at the people behind an art form that has undergone a rebirth and is shaking the natal mucus from its drying wings as a new pool of exciting, schooled, and committed artists take their places. This is also a book about street shops and the artists that flourished or inexcusably withered in those fertile grounds. I want to give the reader a more complete picture of a tattoo artist's life and the lessons learned along the way, the things a TV show or a visit to your local establishment can't capture, the things people wonder about when they look through the window the first time and ask themselves What's really going on in there? This is what I've seen. You might not want to get a tattoo from me after reading this, but there you go..."


The narrative wends its way through Johnson's past to his present, getting the reader to appreciate the journey that led the author to the helm of the Sea Tramp.

He tells it like it is, warts and all. On shows like L.A. Ink, you don't get to see the unsavory characters that are often hindrances to a tattoo business. We get that here.

Part One, Dial Tone, dwells on the business side of tattooing, from employees and scheduling, to flash art and drawing, signs of a good shop, and shop lingo.

Part Two, Man's Ruin, provides a primer on the big problems confronting the business: drugs, criminals, scams and oddities. The oddities section certainly opened my eyes and made me realize any good artist wouldn't bat an eye lash over a mild case of psoriasis.

Part Three, Love and Hate, talks about the emotional journey that the author has taken.

Part Four, Wine, Song and Your Mama, deals with success.

And the final section, Part 6, Smile Now, Cry Later discusses pranks, rivalries, and the life cycles of a couple of shops. Johnson does a nice job addressing that aching question: how does an artist feel when a great tattoo dies along with its host.

Ultimately, Tattoo Machine, despite its meandering, is a thoughtful, humorous and well-written volume on the life of a tattoo artist. Is it every tattooer's experience? Probably not. But I'd be surprised to find an artist who would read this book and not relate to anything between the covers.

We here at Tattoosday give Jeff Johnson's memoir a big thumbs up and a hearty recommendation.

Here's some more on Tattoo Machine.

And here's a real treat, a clip featuring Jeff and a discussion of Sea Tramp Tattoo Company:

Posted by Tattoosday at 5:10 AM

I liked the stories about pranks pulled in the shop. It was definitely an entertaining enough read for someone with only minimal knowledge of the tattoo industry. Good review. And good blog, I enjoy it!

Hello! Thank you for including my article from Jeff's reading at Powell's Books! He was very fun to listen to and the book is quite good.