I will pace subway platforms, while waiting for my train, so that I may exercise a bit, and, let's face it, spot the occasional tattoo.

After meeting TG on the 59th Street platform in Brooklyn, and talking tattoo with him all the way to 95th Street, he told me I was lucky he had removed his sweater back on 59th.

For it was there that I spotted his tattoos. First I noticed this one: 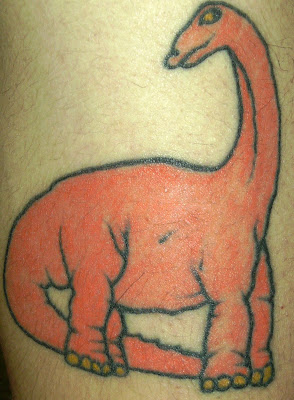 That is a brontosaurus, which is on his left arm. It was an impulse decision and serves solely as a decorative reminder of a moment in time. TG had just left work with a paycheck and wandered into Rising Dragon Tattoos in their (relatively) new 14th Street location.

The artist was Davide, who hails from Italy, and was most likely a guest tattooer at the time.

TG sings his praises as he took a relatively simple design and gave it his all, down to the shading of the dinosaur's eyes and toe nails.

An even more compelling tattoo is this line-drawn piece: 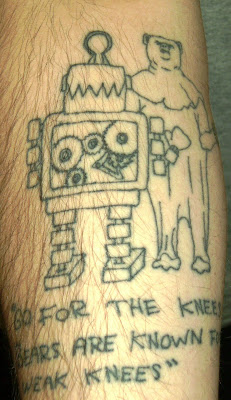 The caption under the robot and the bear reads "Go for the knees! Bears are known for weak knees!"

This refers to a brief snippet of dialogue in Season 1, Episode 3 ("Blind Date") of the NBC sitcom 30 Rock. The line is uttered by the character Frank, who is played by actor/comedian Judah Friedlander. 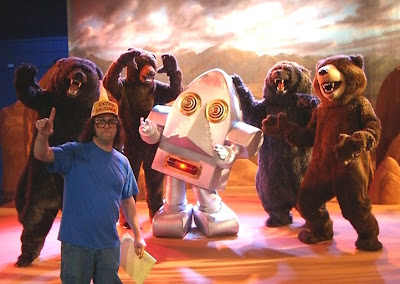 The absurdity of the line made it memorable to TG, who chose to immortalize it on his right forearm.

The tattoo was inked by Mike at Mad Pup's Tattooing in Plattsburgh, New York.

Thanks to TG for sharing his two eclectic tattoos with us here on Tattoosday!
Posted by Tattoosday at 5:38 AM