Tay's Angel Reminds Him of a Battle Won

There are many things to be thankful for on Thanksgiving. I know that may cliché , but at its core, there is the kernel of truth. All it takes to remember this is to cross paths with someone who has overcome the odds to prevail in life.

Yesterday I met Tay in the Borders on Penn Plaza, and he shared this tattoo: 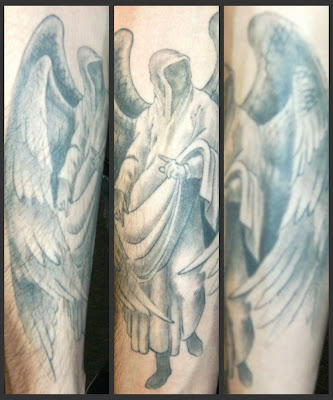 Inked on his inner left forearm, this angelic image is a product of an idea of a spirit watching over him, He gathered a couple of photos for reference and presented them, along with a short written paragraph about the concept, to a tattoo artist at Fat Ram's Pumpkin Tattoo in Jamaica Plains, Massachusetts. It was the tattooer who gave Tay the writing assignment. I am impressed that the artist would incorporate that into his creative process, and it makes perfect sense.

Although Tay is not religious, per se, he wanted something spiritual to remind him of his guardian angel that helped him overcome the mortal challenge of cancer.

As it turns out, Tay is a survivor, who has been cancer-free for ten years after a victory over acute lymphoblastic leukemia.

Tay notes that, all it takes is a look down at his arm to remind him that he has come a long way from the lows of facing one's mortality at such an early age.

I want to thank Tay for sharing his tattoo with us here. And I wish a Happy Thanksgiving to all the Tattoosday readers!
Posted by Tattoosday at 7:12 AM

Fat Rams is awesome - I got my second tattoo on my birthday there a couple weeks ago. Fantastic tattoo shop.