The Return of Sal's Ink - A Teacher's Inspiring Words

Once in a while I check in with old Tattoosday contributors and I recently revisited Sal, who works at a video store (Mr. Video III) in Brooklyn Heights. You may recall his Guns 'N Roses tattoo (here).

Earlier this year, he had this inscription tattooed on his inner right forearm: 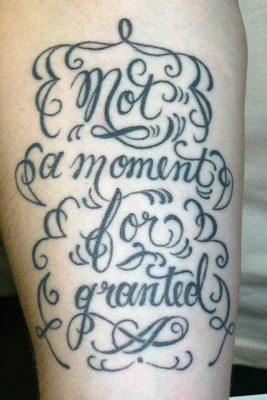 The phrase "not a moment for granted" is inked in tribute to his late acting teacher Fred Kareman, who inspired and taught Sal, not to mention countless others.

Sal explained that Kareman instructed in the Meisner Technique, which he described as an "in the moment" method.

This phrase can be further applied to life, in general, reminding Sal and anyone who sees the tattoo that every moment is precious, and should be savored like a treasure.

The design and tattooing was done by the incomparable Mark Harada at East Side Ink. You can see other pieces by Harada featured here on Tattoosday. Similarly, clicking the East Side Ink tag reveals other fine work done at the shop.

Thanks to Sal for once again sharing a part of his body's canvas with us here on Tattoosday!
Posted by Tattoosday at 5:52 AM