On occasion, I will wander from 7th Avenue to 8th Avenue, through the campus of F.I.T., hoping to spot some creative work. One of my first posts (documented here) featured tattoos from someone I met on that stretch of street.

Last month, I ran into Danny, who had several very nice tattoos.

First I took a picture of this hannya mask on his right forearm:

Then I snapped this photo of the tattoo above his right wrist:

This metal-plated heart represents Danny's emotional toughness, with a trace of sensitivity. In his words, "even if my heart is dead, it will still bleed".

I also took a photo of Danny's knuckles, which I wanted to post up on Knuckletattoos.com. However, since they're working on a six-month backlog, I thought I'd spare them the extra post and just share these here: 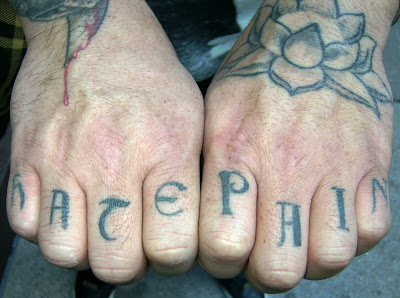 They read, of course, "HATE PAIN". This just represents what Danny was going through at the time he had his digits inked.

Initially, he had told me his back was done, but I didn't press him to show me the work. By the time I had taken pictures of his knuckles, I guess he felt comfortable enough to share this truly remarkable back piece: 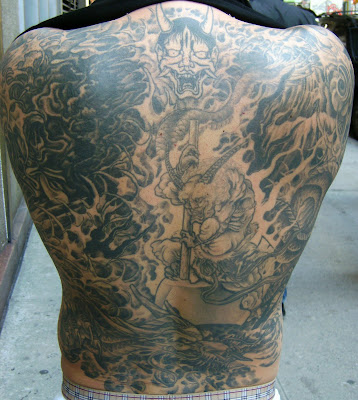 All of his work was done by Thailand Mike at Scratch Tattoo in Elmhurst, Queens. He initially went to Mike for a cover-up on his back, providing just the central part of the design... 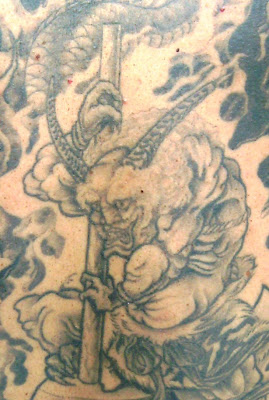 Danny visited from time to time for over a year, having elements of the back filled in. The demon head at the top of the back is particularly cool 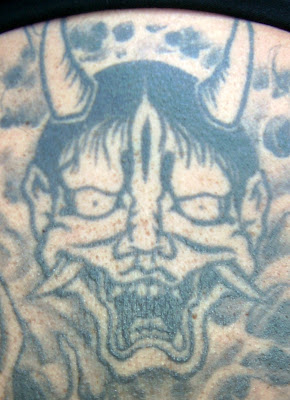 and the dragon hovering above the wasitline is also impressive: 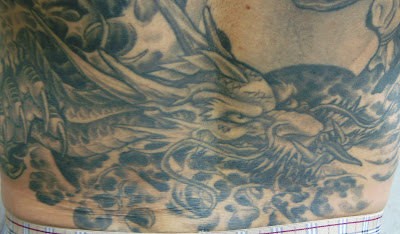 I rarely get to feature back pieces, as they have to be offered up by generous contributors, so when I see one, I am seldom disappointed.

Thanks again to Danny for sharing so much of his work with us here on Tattoosday!
Posted by Tattoosday at 5:33 AM