One of the most popular symbols in modern Polynesian tattoo is the green sea turtle, or honu, as it is known in Hawaiian.

I saw a lot of honu tattoos while I was in Hawai'i, but I didn't snap any photos of them until my last day on Oahu, when I was wrapping up my trip with a last minute stop at Pearlridge. More specifically, I was at the Pearlridge Longs Drug Store, a great place to stock up on chocolate-covered macadamia nuts, Kona coffee, and other tasty local snacks that are hard to find on the mainland.

While wandering the aisles, I spotted not one, but two honu-adorned locals, who were kind enough to share their tattoos with me.

First was Ash, who didn't say much about the four honu on his left leg, other than the fact that he has "always loved turtles," and that his brother was the artist who did the tattoos.

Next was Chantel, who has this lovely tattoo on her upper back: 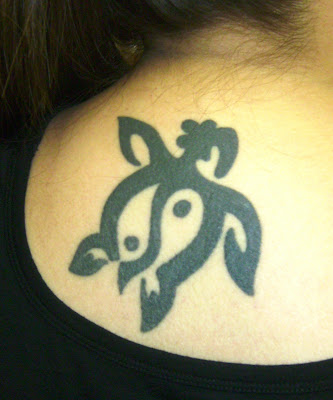 This not only has the honu element, but also has a floral aspect, along with a Yin and Yang design.

When I asked her where the design came from, she laughed and said she had seen it on a sticker plastered to the back of a car. She liked it so much, she got some paper, traced it, and brought it into a shop called Big Fat Tatts, where the artist sketched it and cleaned up the lines.

Thanks both to Ash and Chantel, for finally getting me my photos of honu tattoos, just a few hours before returning to New York.
Posted by Tattoosday at 7:46 AM