On my last day in Hawai'i, I was at Pearlridge, when I spotted a guy walking through Borders. The swirling script on his inner left forearm grabbed my eye: 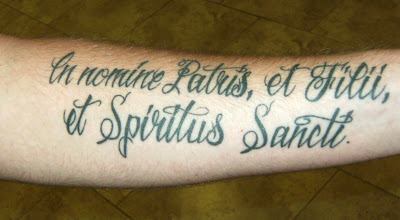 This Latin phrase, "In nomine Patris, et Filii, et Spiritus Sancti " translates to "In the name of the Father, the Son, and the Holy Spirit".

Dustin, who serves in the Navy, is a Catholic, and he wanted something that expressed his faith. This is one of his three tattoos.

The tattoo was inked by Jeremie Miller at 3D Ink Tattoo Studio in Pensacola, Florida.

Thanks to Dustin for sharing his tattoo with us here at Tattoosday!
Posted by Tattoosday at 3:21 PM