I've alluded, in previous posts, to a trip to Ala Moana Center, during which I was astounded by the amount of tattoos I saw, much more than I recall seeing on my previous trip, five years ago.

I was in the expansive food court section of the complex when I met Reston and his uncle. I was first intrigued by the work on his left arm:

but then, in one of those rare Tattoosday moments in which I see much more than I anticipated, his uncle convinced Reston to show me his back, which revealed this wonderful work: 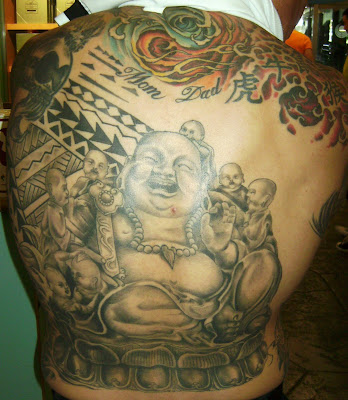 For Reston, his tattoos are tributes to his heritage. The large Buddha on his back acknowledges the Buddhist faith that can be found on his father's side of the family. The tiki and tribal patterns are in honor of his mother's Pacific Islander lineage. This is apparent from the merging of the two styles (and the names "mom" and "dad" at the top of his back: 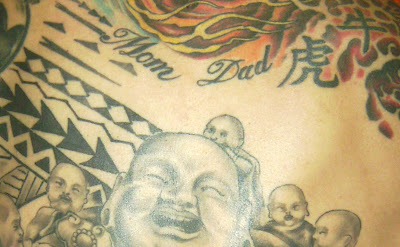 In addition, Reston shared this cool lizard on his left shoulder: 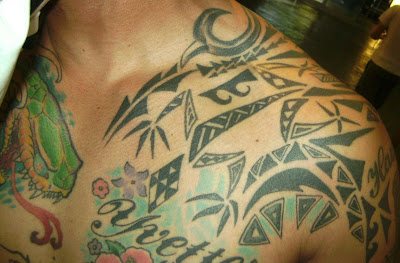 Actually, in Hawaiian tattoo styles, this is referred to more specifically as a mo'o, which can be defined (source here) as a "spirit guardian (lizard) that protects a resource, such as a fishpond, from overuse and other abuse". Mo'o are also referred to as geckos.

There's a lot going on with Reston's personal canvas, but you can see the geographic shapes of the mo'o design jumping off the skin. 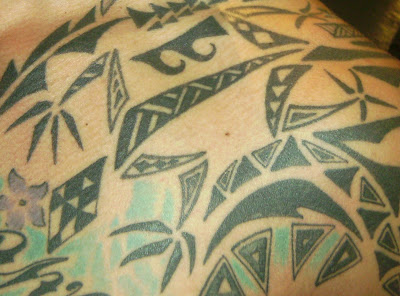 All the work was done in California. The Buddha back piece was inked by Jon Highland, owner of 12 Monkeys Tattoo in Tracy, California. The majority of the tribal/Polynesian work was tattooed by Orly at Humble Beginnings Tattoo Studio in San Jose.

A hearty mahalo to Reston for being bold enough to remove his shirt in the Ala Moana food court so we could all get to better appreciate his ink. We here at Tattoosday thank you for your contributions to the site!
Posted by Tattoosday at 6:23 AM