Tines for the Memories

In what can only be described as a true New York City moment, the poor luck of a glitch on my tax refunds, which required me mailing amended returns, which precipitated me popping into the James Farley Post Office, led to my spotting the following tattoo: 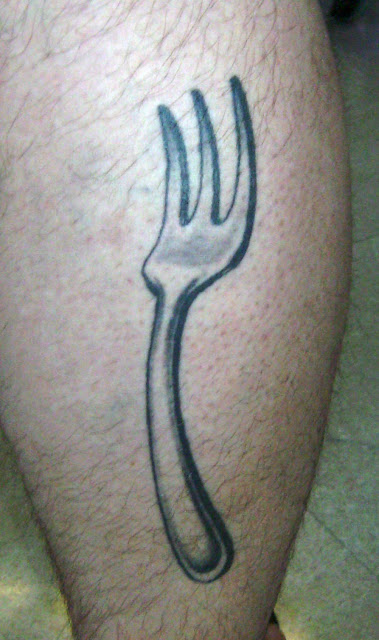 Of course, I had to ask.

This ink is sported by Michael, an actor-chef who is in town performing, through the end of May, in the off-Broadway production of Bloody Bloody Andrew Jackson at the Public Theater. Michael is in the role of Calhoun.

The tattoo represents a three-tined fork which, Michael asserts, is "the best kind of fork because you get less metal in your mouth". He also indicated that it carried a second meaning, in that it also represented Neptune's trident, which is significant in that he is a Pisces, a water-based astrological sign.

Host of four tattoos, this one was obtained as part of a two-day bachelor party he threw for a friend. The main focus of day one was getting inked. Day two was for, well, more traditional bachelor party fare.The artist was "Eric the Sandman".

Thanks to Michael for sharing his fork with us here on Tattoosday. Be sure to catch him at the Public Theater before the show closes at the end of May!
Posted by Tattoosday at 6:19 AM