The Phoenix and the Bulldog

However, this week gave us a slight reprieve, and yesterday I spotted this nice piece in the plaza in front of the Borders at Madison Square Garden: 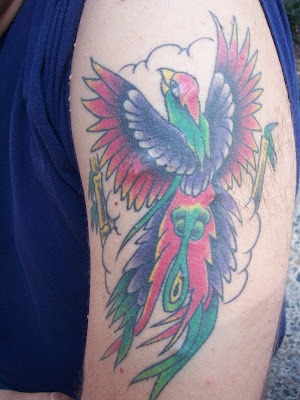 Actually, I only spotted the tail feathers of the phoenix dropping below the short-sleeved left arm of a New Yorker named Dave Sperandeo.

Dave said that the phoenix, which is a more common tattoo subject, represents his starting over after a divorce. This nice piece was inked by Peter at Peter & Cubo's Tattoing & Body Piercing in Ozone Park, Queens.

Dave offered up a second piece, on his left leg: 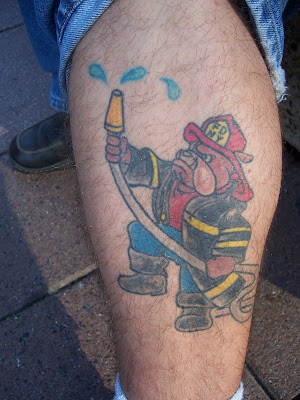 As you may have guessed by the bulldog with the fire hose, Dave is a New York City fireman. He had this inked five years ago when he graduated from the academy and became a member of the FDNY. I especially like the nice touch of the three blue water droplets at the end of the hose. This one was tattooed by Cubo at the same shop in Ozone Park mentioned above.

Thanks again to Dave for offering up his ink and keeping Summer alive for Tattoosday for a little bit longer!
Posted by Tattoosday at 6:20 AM