The winter in New York City has not been kind to us here at Tattoosday. Inkspotting is operating at minimum visibility, but we try not to let that discourage us.

This afternoon, passing through Penn Station, I spotted some knuckle tattoos on Liz, who gladly complied with my request to photograph them. Check them out here over on KnuckleTattoos.com.

The drawback of talking to people waiting for the L.I.R.R. is, at some point, their train will flash on the board, and they'll dash off. Cognizant that the departure time of Liz was rapidly approaching, I asked if she had any other tattoos I could feature.

Unfortunately she was bundled up against the cold, and the bulk of her 30-plus tattoos were not easily viewable.

She did present to me, on the left side of her neck, these cherries: 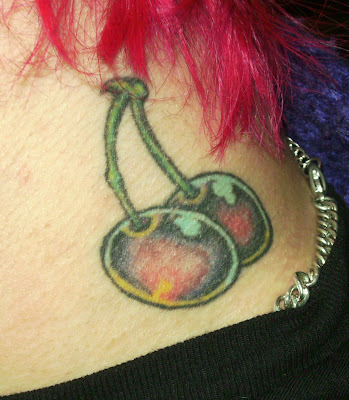 No earth-shattering story here, folks, Liz just likes cherries. She had this inked at Tattoo Mania on Staten Island by an artist named "O'Brien 7," or just "7".

Thanks to Liz for sharing her ink with us here on Tattoosday!
Posted by Tattoosday at 5:15 PM