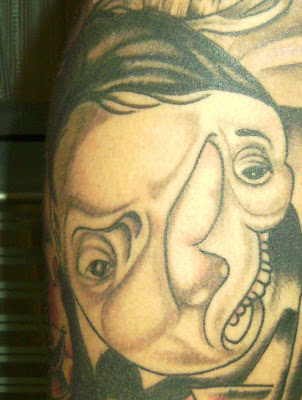 Erika is the first person, in over two years of inkspotting, who asked, jokingly, "Were you stalking me?"

News to my readers: I don't stalk people. I may have followed someone a block or two until I've caught up with them, but following someone longer just seems creepy, and I will bail out on a tattoo if I can't catch up to someone.

But what I told Erika in Penn Station made her laugh.

"I was about to approach someone else about their tattoo," I confessed, "but you walked by and yours was much better."

She appreciated my honesty and showed me the tattoo that had so intrigued me:

She found this artwork online from an artist named Tim Biedron. She was drawn to this piece because it "looked different and deranged". The detail is phenomenal as well. It reminds me a bit of Picasso's iconic mural Guernica. I believe it is based on his 2003 piece "Catch and the Click Beetle": 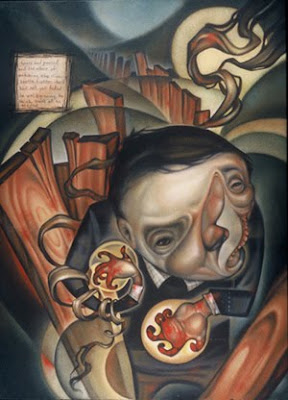 This tattoo is on her right shoulder and on her left bicep she has this amazing tattoo:

It's based on a work by Shepard Fairey, an artist and graphic designer who is most famous for designing the Obama "HOPE" campaign poster. I believe this is the original source material, part of Fairey's retired "Stencil Collage" collection: 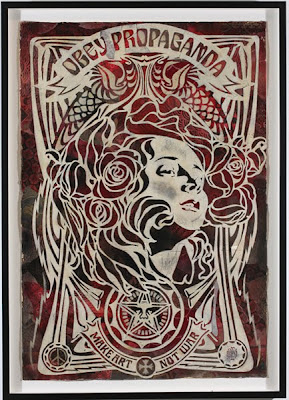 Both tattoos were inked by John Torres in Yonkers.

Thanks to Erika for sharing her amazing tattoos with us here on Tattoosday!
Posted by Tattoosday at 7:06 AM