I met Taylor where she works at Kaleidoscope, a toy store in Bay Ridge, Brooklyn.

I gave her a flier after admiring her really cool feather tattoo that was inked behind her right ear. 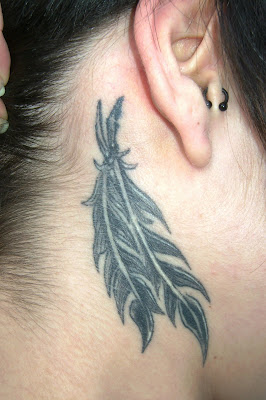 A week later, I was zipping by on my bike and saw her on a break outside the store. That was when I had a chance to speak to her about her tattoos and take the photos for this post.

This is one of her nine tattoos, and was done by an artist named Chris who works out of Puncture Tattoo in neighboring Dyker Heights, Brooklyn. 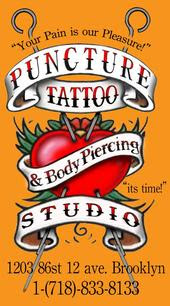 Taylor says the tattoo is inspired by the fact that she feels free-spirited, like a bird, and that her aunt, who died in a plane crash, used to call her a "little Indian girl". The dangling feathers behind her ear seem to capture both sentiments nicely.

Unlike the first time I met Taylor, on this occasion she was wearing a shirt that showed off this cool tattoo at the top of her back:

Taylor explained that she loves cats and her sister's gray cat Dusty passed away from breast cancer, which has also been a disease that has run in her family, as well. She had the tattoo artist, Peter Cavorsi, of Body Art Studios, model this piece based on Dusty's eyes.

As always, Peter did a superb job. He is no stranger to Tattoosday, having inked one of my tattoos (seen at the bottom of the page) and several of my wife, Melanie's. This link will show you all of Peter Cavorsi's work that has appeared on the site over the last two-and-a-half years.

Thanks again to Taylor for sharing her two beautiful tattoos on Tattoosday!
Posted by Tattoosday at 5:53 AM

Thanks for these tattoo images and especially the explanation of them. It is always interesting to see why people got tattoos, what they mean to them, and what they represent. Explanations can turn an ordinary tattoo into somethign special!