Our next Tattooed Poet o' the Week is Meg Freitag.

She sent us two tattoos, starting with this colorful scene:


"This first tattoo, on my left arm, is of two red foxes and two bluejays all enjoying themselves together in the forest. I wouldn't say that there's much 'meaning' to it, other than I'm pretty crazy about animals, and interested quasi-philosophically in predator/prey relationships, the necessary violence of it. It is something I think about a lot, and definitely emerges as a theme in my writing. I like the idea of forcing these two animals who are at opposite ends of the food chain to exist together in this way, in a funny sort of freeze-frame harmony. And foxes and jays are two of my favorites--they are both so extraordinarily clever! I admire their trickster natures, their no-nonsenseness, their savvy. I also think they are very aesthetically beautiful, which was ultimately a large part of why I chose them for this purpose. This tattoo was done by Tina Star at Resurrection Tattoo in Austin, Texas."

She also sent us this piece: 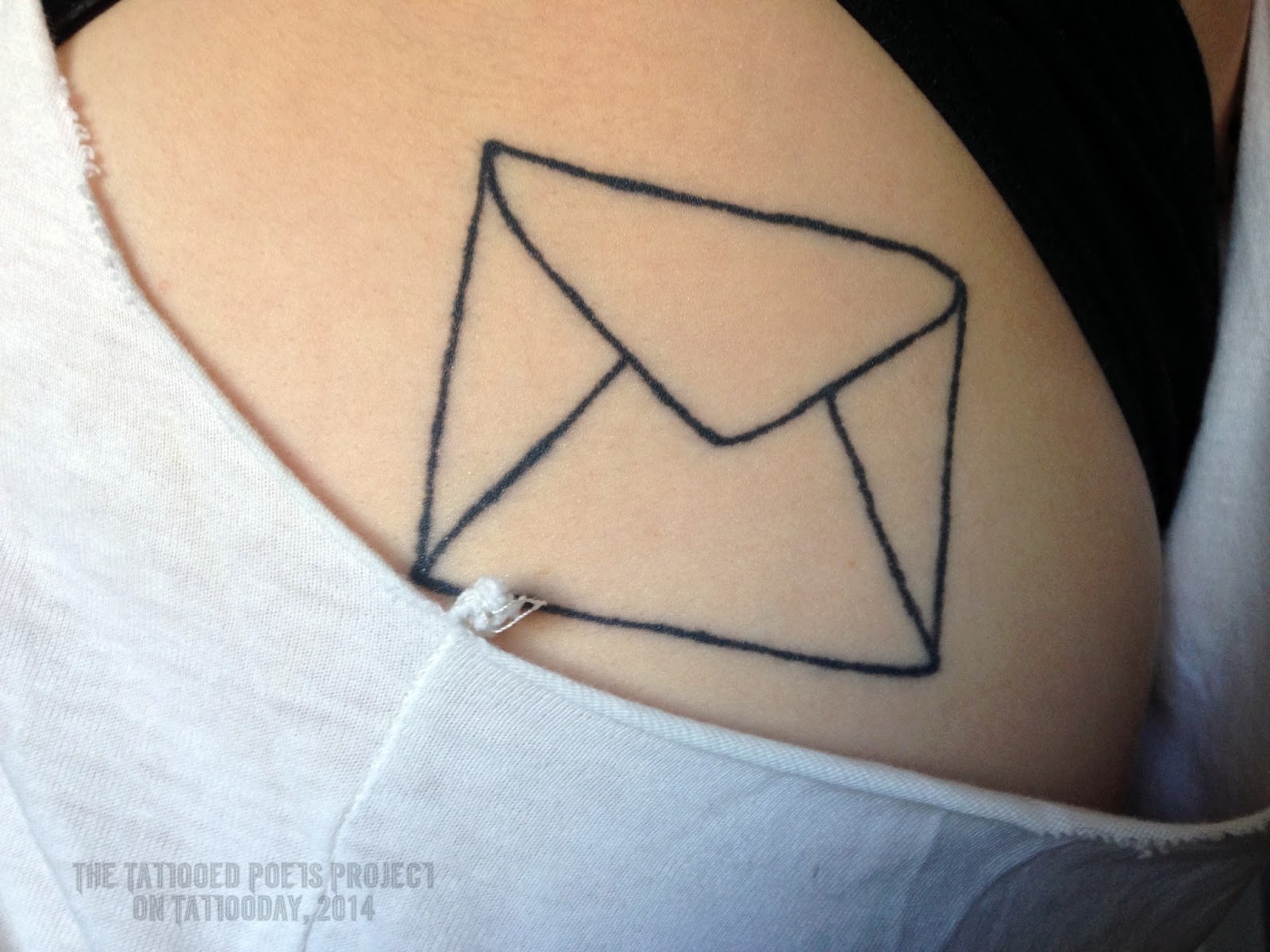 
"The second tattoo is on my left ribs, and is a simple outline of an envelope. My two close friends and I got these matching tattoos the month before I moved to Austin for grad school. We each got a different size envelope--in addition to be a symbol of connectedness, it's also sort of a vague take on the matryoshka doll. Mine is the largest of the three, for no other reason than my friends both already have quite a bit of body art and I had more space. These ones were done by Sean Perkinson at FTW Tattoo Parlor in Oakland, California."

She also sent us this poem, which was first published in the summer 2014 issue of Tin House:


What Small Death Shines Up from the Dirt

Edith, I think I’ve been trying to replace you.
Lately I’ve lit fires in my own mouth
That can only be put out with another mouth. He and I,
We found a baby rattlesnake injured

In the middle of the road. Half its body stuck
To the blacktop, the other half looping around
And around its own busted part like a busy
Signal. He said, The babies are the most dangerous.

They haven’t learned to restrict their own venom
And so they pump it all in at once.
Everyone knows that, I said. But still he had to stop me
From wrapping the leftover part of the snake up

In my T-shirt and carrying it home.
I thought that if I saved it, it would be so grateful
It wouldn’t try to hurt me. Edith, I’m afraid I can love myself only
If someone else loves me first.  One time I let him have me

Against the sink in a TJ Maxx bathroom
And we didn’t even leave our merchandise outside.
One time I was so afraid of sharks I had a panic attack
In a paddleboat while my cousin yelled at me, over and over,

We’re in a goddamn lake! One time I dreamed I saw
A hundred of my own heads on wooden stakes, but they were tiny,
Like a tray of hors d’oeuvres. One time I had a dream that the dog ate you
And choked on your beak and also died.

One time I thought I loved someone
I hardly knew at all. Long ago, I saw a hawk in a tree,
Disemboweling a baby prairie dog. I was with a child and instinctively
I put my hand over his eyes so he wouldn’t have to see.

But the guts, Edith, I couldn’t take my own eyes off them.
How they shone in the dirt, like wet rubies, or like something
You didn’t know you were even looking for,
In the moment when you finally find it.


Meg Freitag was born in Brunswick, Maine, and now lives in Austin, Texas, where she's an MFA candidate at UT's Michener Center for Writers. Her work has appeared in Tin House, Narrative, and Smoking Glue Gun.

Thanks to Meg for sharing her tattoos and poem with us here on Tattoosday's Tattooed Poets Project!


If you are reading this on another web site other than Tattoosday, without attribution, please note that it has been copied without the author's permission and is in violation of copyright laws. Please feel free to visit http://tattoosday.blogspot.com and read our original content. Please let me know if you saw this elsewhere so I contact the webmaster of the offending site and advise them of this violation in their Terms of Use Agreement.
Posted by Tattoosday at 6:25 AM