The month of September has drawn to an end and I almost forgot our Tattooed Poet of the Month! 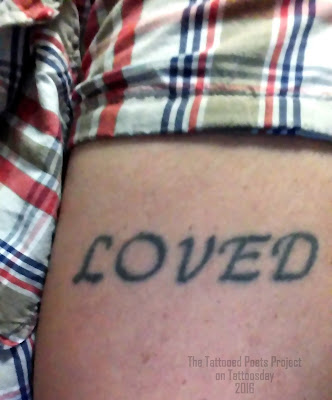 
"I got this here tattoo the summer before my senior year at college. A few months previously, I had gone through an awful break-up that was entirely my fault. In the midst of the break-up, Madonna’s 'What It Feels Like for a Girl' video premiered. Now, I don’t know whether you remember that video, but in it Madonna’s badass character has the word 'LOVED' tattooed on the back of her neck. I saw this and was immediately moved by it—I’m still moved by the memory. And though I had never wanted a tattoo before, suddenly I wanted that tattoo, and I wanted it on the back of my neck. A few months later, in the final days of summer, I was hanging out with my mom in Portland, and on the spur of the moment, it was decided (my mom was somehow even more into the idea than I was) that I should get the tattoo, but on my arm. I don’t remember exactly where I got it done, but I’ve noticed it every day since, and it has made me happy every day since. I think of it as both a record of, and a reminder of, an aspiration—it reminds me to love more.

As a reference, here's the aforementioned video:


The Image of the Body in the Mind


Except my money didn’t change


But the apartment Lord was nicer


Over his face and body in my mind


Which now are blanks expecting Boss Hogg’s face and body


But he was kind


Or what     I thought was kind back then


if I don’t first picture Rosco bringing him bad news


roaches but no roaches     when I woke up

crawling on my eyes

Shane McCrae teaches at Oberlin College and at Spalding University’s low-residency MFA in Writing Program. His most recent books are In the Language of My Captor (forthcoming from Wesleyan University Press in 2017) and The Animal Too Big to Kill (Persea Books, 2015). He has received a Whiting Writer’s Award, a fellowship from the NEA, and a Pushcart Prize.

Thanks to Shane for sharing his tattoo and poem with us here on Tattoosday's Tattooed Poets Project!

If you are reading this on another website other than Tattoosday, without attribution, please note that it has been copied without the author's permission and is in violation of copyright laws. Please feel free to visit http://tattoosday.blogspot.com and read our original content. Please let me know if you saw this elsewhere so I contact the webmaster of the offending site and advise them of this violation in their Terms of Use Agreement.
Posted by Tattoosday at 12:58 PM