Amie Whittemore and Her Kankakee Mallow (The Tattooed Poets Project)

Today's tattooed poet, Amie Whittemore, is also a prior contributor. She appeared here before, in 2018. She sent us this photo: 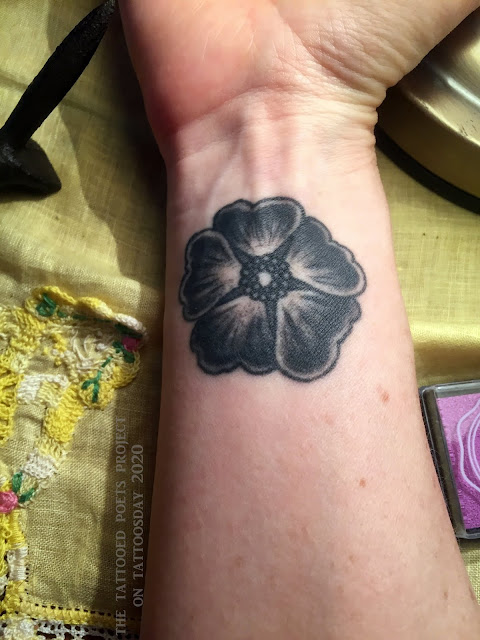 
"This tattoo is special to me on several levels. First, it is of a Kankakee mallow, the only extant wildflower native only to Illinois; it was considered extinct before a pocket of it was discovered on Langham Island in the Kankakee River a few years ago. Kankakee is my home county and my parents live on the river so it felt like the perfect tattoo to get to capture my love of home. Obviously, I also wrote a poem about this magnificent flower.

I also got the tattoo in a former home. A house where I lived in Portland, Oregon in 2003-2005 became a tattoo studio (Oddball Studios @oddballtattooery) after my roommates and I moved out. While I was in Portland for AWP 2019, my old roommate and I visited the house-turned-studio and Sarah Crosley (@sarahecrosley) worked her magic. It was surreal seeing how the house had transformed; and now that past life, even the idea of getting a tattoo, feels even more distant, on the other side of the chasm of the pandemic."

Amie also sent the following poem, which originally appeared in The Heartland Review:


Don’t be Shallow, Vote for the Mallow
Slogan promoting the Kankakee mallow, the only surviving wildflower native to Illinois, found in Kankakee County and considered endangered, as its state flower (Habitat 2030).

Bright blister, bold break
in the brush of alien
honeysuckle, rarest
perfume in a disaster
of farmland, groping
for sunlight, recluse
requiring fire
to suss your seeds
dormant for decades
on Langham Island,
chewed bubblegum,
pink cap, drowsy
trumpet, your fan club
guards, films, and undresses
your flanks of scrub
so you’ll sidle up the sky.
These weekend naturalists
arrive by canoe to strip
weeds, count your seeds,
then eat bologna at noon—
faux meat the same color
as you. Hinge in the thicket,
foxed cream, leaves
the champagne of green things,
like any secret, your needs
outpace your means—
as you know. You’re no
fool. You shimmy
as if your near extinction
was a dream. The crew
goes to bed smelling the hem
of your pink skirt, lips
buttered with your velvet.
Nice work, you lucky flirt.

Amie Whittemore is the author of the poetry collection Glass Harvest (Autumn House Press) and the 2020 Poet Laureate of Murfreesboro, Tennessee. Her poems have won multiple awards, including a Dorothy Sargent Rosenberg Prize, and her poems and prose have appeared in The Gettysburg Review, Nashville Review, Smartish Pace, Pleiades, and elsewhere. She is the Reviews Editor for Southern Indiana Review and teaches English at Middle Tennessee State University.

Thanks to Amie for coming back to us and contributing more work to the Tattooed Poets Project on Tattoosday!

This entry is ©2020 Tattoosday. The poem and tattoo are reprinted with the poet's permission.

If you are reading this on another website other than Tattoosday, without attribution, please note that it has been copied without the author's permission and is in violation of copyright laws. Please feel free to visit http://tattoosday.net and read our original content. Please let me know if you saw this elsewhere so I contact the webmaster of the offending site and advise them of this violation in their Terms of Use Agreement.
Posted by Tattoosday at 8:49 AM