dawn lonsinger and the Three of Swords (The Tattooed Poets Project)

We didn't want National Poetry Month to end without celebrating at least one tattooed poet.
Fortunately, previous contributor dawn lonsinger has been kind enough to share, with some new ink to appreciate! 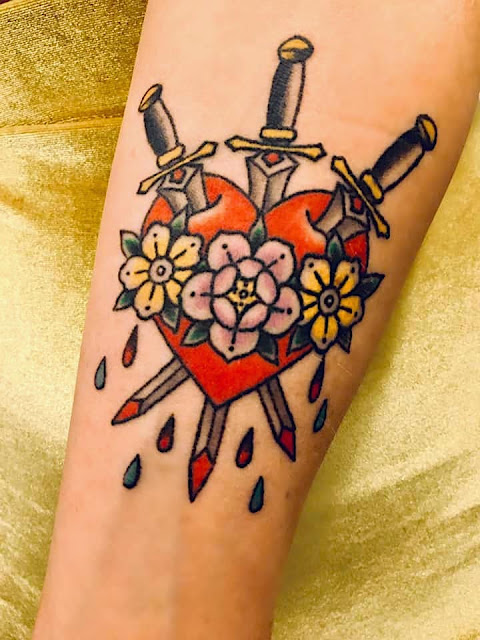 "I got this Three of Swords tattoo -- on some level -- to mark the grief of this year, of all the losses piling on top of each other, the pandemic making even more vivid the disturbing social inequities & technological dysphoria & substratal loneliness in this country. In tarot, the Three of Swords card represents suffering from major heartbreaks or betrayals, feeling lonely or lost or both . . . hence the heart (seat of love & beauty & affection) pierced through with three swords, which is also often depicted in front of a stormy sky with rain pelting down, the way mourning feels inside of us. And who among us -- in this warring world -- has not been heart-riven?
Depending on the day, depending on the mood, I name the three swords: childhood, heartbreak, health . . . or capitalism, patriarchy, white supremacy . . . or subjectivity, loneliness, death . . . or poetry, poetry, poetry . . . or Philomela, Antigone, Cassandra . . . or after those who have wounded me the most: P, J, K, or after those I have lost & miss: Carol, Sue, X. And, of course, I know I will keep on renaming them, because none of us know what our most profound penetrating incandescent woundings will be until the end. I also think it is meaningful that the swords -- tools of war -- pierce not into viscera, but into our symbol for interiority; the flesh of language against (in both senses) the mayhem of metal & 'progress'.
Of course, when this tarot card is reversed -- which is how I see it -- it means some kind of reconciliation with pain, maybe forgiveness, maybe release or optimism. But I like -- either way -- that it's not a heart broken, but a heart wounded, and in an ongoing way. I think -- because we are addicted to narratives of transformation & transcendence -- that we are often too eager to be done with loss/pain/grief, to be healed, even though the ache reminds us of what we've held precious/irreplaceable, something or someone or some time that filled us with blooming.
I don't buy the old adage that 'time heals all wounds;' rather, time gives us the space to learn how to better dialogue & dance with the pain, which remains. Whenever I get too precious, too tornadoed by how unintelligible and unfair the world, and am tempted to wish things were easier, that we could banish sadness . . . I remind myself that idealism is violent, and GOOD VIBES ONLY is a mantra of the repressed . . . and of something John Keats wrote in a letter: 'Do you not see how necessary a world of pains and troubles is to school an intelligence and make it a soul?'
In my tattoo -- more classic in design & color than my other tattoos -- there are three flowers over the heart, and blood & rain (or tears) falling. I'm into its all-at-once wilding & smarting & opening & ablution. Also, my friend Aggie says the blood-tipped ends of the swords look like pencils, and that's a misrecognition I can get behind."

We were too late. The knots of clay & kinkof thorn & prophecy of fur were cleared away & the sun

was already a dividend of glass facades and rearview mirrors.Between people a line of some sort or another:

grocery line, bottom line, perforation, window sill, the edgeof the bed. Your guess is as good as mine. Between you and me

and stacked one on top of the other like prayer books,kids snaking circles in the waterless fountain while

snowy branches hook around the sky’s bloodless neck.Between people a line of some sort or another: exit only lane,

exclamation point, barbed wire, zipper, mail slot, trench,the circumference of your wrist. Between you and me

the problem of fathers, snack packs of applesauce,the questions of the dead clinging to the wet landscape

of the living, and countless lottery machines curvingtiny numbers like the bones of our inner ears onto slips of paper,

scattered secrets, and an aisle in every hardware storewhere assorted compendiums of nails hang suspended like dreams,

beautifully fallow as if they might be spared utility. Between peoplea line of some sort or another: deadline, Uber ride, VIP access line, fire

line, hemline, referendum, lip. And above us, chiffon shiftsof swallows unfolding a way out of the infrastructure, but also

above us: the intimations of heaven & our estrangement,and below the underpaid line cooks & dishwashers, wingless

& sweating. Ours is a ghost story. Ours is a luxury gonesour and a love gone sweet. Ours are the nameless blooms

we keep calling by made-up names expedient and/or beautiful,the hydrangeas head-heavy………………………………………& woozy by the checkout. 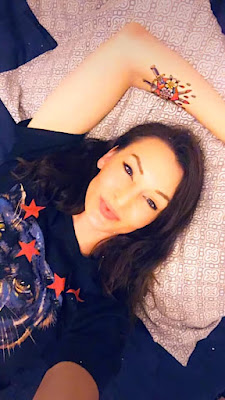 dawn lonsinger is the author of Whelm (winner of the 2012 Idaho Prize in Poetry and Freund Prize), and recipient of a Fulbright Fellowship, four Dorothy Sargent Rosenberg Prizes, Utah Poetry Prize in Prose and Poetry, the Greg Grummer Poetry Prize (chosen by Eduardo Corral), and runner up for the Poetry Society of America’s Emily Dickinson Award (chosen by H.L. Hix). Her poems and lyric essays have appeared in American Poetry Review, Black Warrior Review, Colorado Review, Subtropics, Beloit Poetry Journal, Best New Poets, and elsewhere. Her poem, “Sundress,” was chosen by the Pennsylvania Center for the Book to be featured in their Public Poetry Project, and appeared on 1500 posters distributed to libraries, public schools, bookstores, and universities. She holds an MFA from Cornell University, a PhD from the University of Utah, and is an Associate Professor at Muhlenberg College, teaching Creative Writing, Poetry & Politics, and Monstrosity & Apocalypse in Literature and Film. She has recently finished a creative nonfiction book that tries to navigate the consanguinity and dissonance between erotics and robotics in a Tindering world, and is now working on finishing a second book of poems, The Long and Terrible Taming, which explores taming and wildness in all its manifestations, and a speculative fiction novel, Beast, that strives to upend our ontological assumptions about animality vs. humanity.
I am extremey grateful to dawn for returning to the Tattooed Poets Project and sharing her new tattoo and her poem with us here on Tattoosday's Tattooed Poets Project! 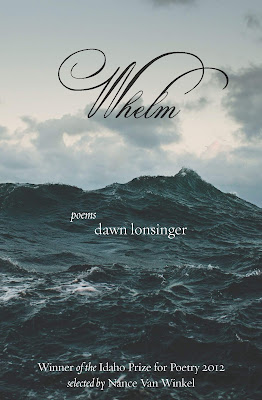 This entry is ©2021 Tattoosday. The poem and tattoo are reprinted with the poet's permission.

Posted by Tattoosday at 7:40 AM