Alex Shares a Floral Tattoo, Roots and All

Sometimes I see tattoos before I see people.

Back in July, for example, I approached a guy on the West 4th Street subway platform to ask him about this tattoo on his right forearm:

It was only after I said hello to him that I realized he was someone named Alex who lives in my neighborhood in Brooklyn.

In fact, Alex had a tattoo featured here back in 2009, after I stopped  him in the laundromat.

This floral tattoo is a representation of how a flower overcomes obstacles and pain to lay down roots, rises up, and blooms. 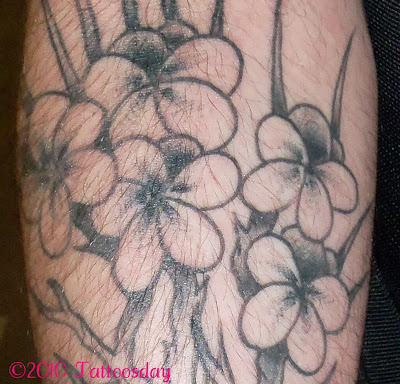 He draws the comparison to life, as nothing comes without hard work and bypassing obstacles.

Thanks to Alex for once again sharing his work with us here on Tattoosday!
Posted by Tattoosday at 10:42 AM