I have a few days off and was buying some milk at the grocery store when an older gentleman in line behind me complimented me on the tiger tattoo on my calf, which has been well-documented here, in this initial post, and subsequent ones.

The gentleman asked who the artist was and mentioned his son was an artist as well. "Who?" I asked, and he told me, Mike Perfetto, aka Designs by Michael Angelo in Brooklyn. I gave him a flier and he introduced himself as Ralph Perfetto, our Democratic District Leader here in Bay Ridge.

I know you're likely thinking, "Nice story, Bill, but is it really that much of a small world coincidence?" Actually, yes, because my backlog had brought me to posting a couple of tattoos on Peter, who I had last seen at the Matty No Times benefit back on July 17. One of those tattoos, you guessed it, is by Mike Perfetto. 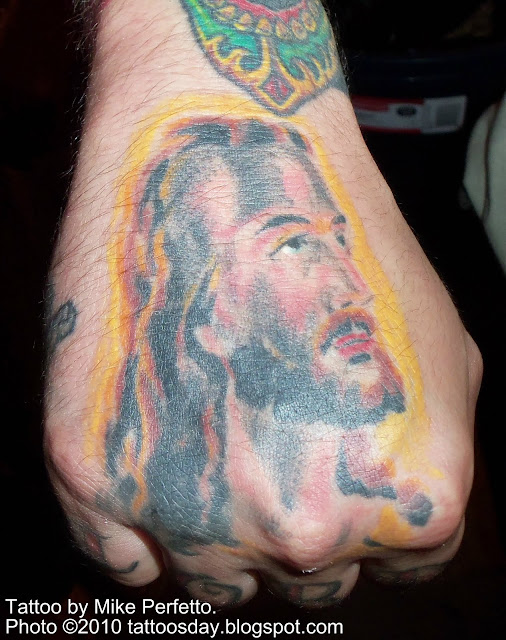 Pete also shared a tattoo on his leg by legendary Brooklyn artist Tony Polito. As you can see, Pete has quite a collection of ink, and he takes pride in the work he has from "old school" New York artists tattooing in the American Traditional style.

Pete explained that "Old Calcutta" was a nickname for Tony's shop from the early '80s to the mid '90s because of the high intensity atmosphere of the shop and the people who were there. 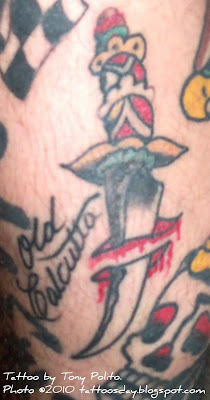 Thanks to Peter for sharing his tattoos with us here on Tattoosday (again and again). Peter has been working hard at New York Hardcore Tattoo on Stanton Street. They have recently remodeled the shop and are working hard on producing quality art on the denizens of New York City. Be sure to stop in and meet their crew.
Posted by Tattoosday at 12:32 PM