Butterfly tattoos can be a dime a dozen (no offense, butterfly fans), but moths, on the other hand often get a bum rap, taking a back seat to their more flamboyant insect cousins. To the chagrin of some inked lepidopterists, you don't see as many moth tattoos. This, however, is a lovely exception, perched on Claire's forearm: 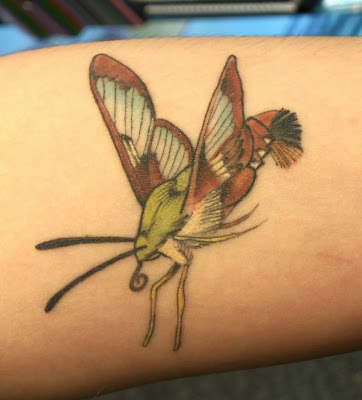 This is Hemaris Thysbe, more commonly known as the Clear Wing Hummingbird Moth, a beautiful insect that gets its name from its large size and rapid wing speed. 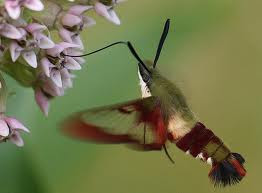 Claire, who I met in Borders at 2 Penn Plaza, is originally from Vermont and this moth reminds her of back home. There are certainly no Hummingbird Moths fluttering about New York City!

She found a picture she liked and took it in to Yoni Ziebler at Brooklyn Adorned where he recreated this lovely specimen.

Work from Adorned appears here often and can be seen together under this tag.

Thanks again to Claire for sharing her Hummingbird Moth with us here on Tattoosday!
Posted by Tattoosday at 7:07 AM