In late June, I ran into Gina in Penn Station and complimented her on a tattoo she had on her back. At the time, she was wearing something with straps that covered part of the design. I gave her a flier and she remarked that she had just recently discovered the site through this post on the tattoo of Julie Powell.

Alas, like so many folks to whom I give fliers, I didn't receive any emails or photos. But a month passed and one day I was pleasantly surprised to see an email from Gina, with the following photos of her phoenix tattoo: 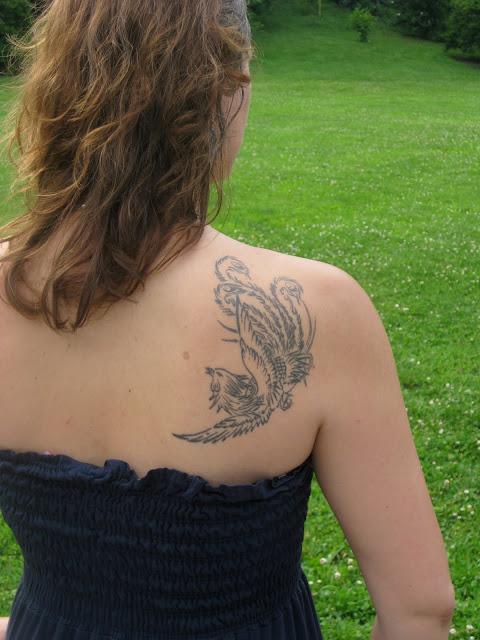 I'll let her explain the rest:

"... I had completely forgotten [about sending in the photo] until I found the picture I took for you on my camera... This was done by Junii at the Diamond Club in San Francisco. [Bill Salmon, Junii's husband, is the studio owner]. She does amazing line work.  She's also incredibly conscientious about design and her clients.  For both my tattoos, she spend a lot of time talking with me, looking at the 20 pictures I had brought in of bits or aspects of what I wanted, then went off and did her own research, always coming back with exactly the right drawing. 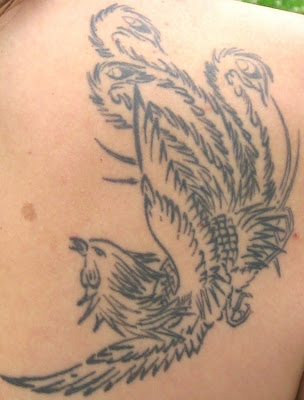 This one - I got it after a really, really difficult year. So, obviously, not the deepest symbolism - just wanted to remind myself of the possibility of renewal."

Thanks to Gina for sharing her tattoo with us here on Tattoosday!
Posted by Tattoosday at 11:21 AM