Travis and Another Perspective of Ganesh

People who are familiar with being featured here on Tattoosday know that there is a process, in which I generally go chronologically, and it often can be several weeks before I post their work.

But there are always exceptions.

Take, for example, Travis, who I met on Monday near the corner of 32nd and 8th Avenue waiting for a bus.

Under normal circumstances, you'd have seen Travis's tattoo in September but, the next day, I got the following mysterious tweet: "@Tattoosday post pictures of that guys tattoos- you were talking to him yesterday outside MSG plzz! *stalker*".

Well, a little bit of digging, and I discovered that the source of the message was Hannah, who appeared last month on Tattoosday here. And since I'm a sucker for my fans, I'll gladly oblige and share Travis's tattoo with us here today. Here it is: 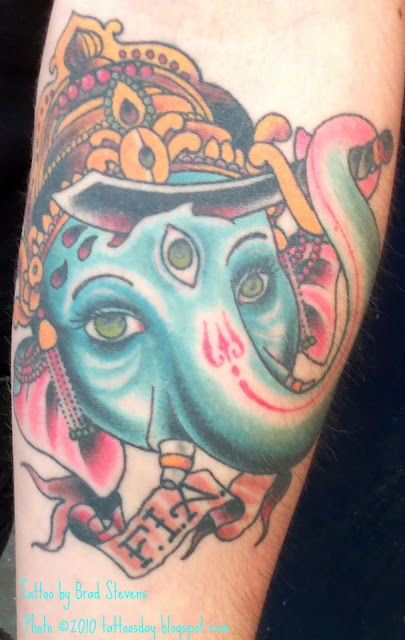 Travis's tattoo depicts the Hindu deity Ganesh. However, unlike this Ganesh tattoo, this one has a twist.

Travis explained that one of the common beliefs is that Ganesh was born with a human head, but that he was beheaded as a boy, and his head was replaced with that of an elephant. He obtained a third eye so that he could make sure he was never betrayed again.

Travis says that he often feels "too aware" of others, to the point that it detracts from his enjoyment of life. Thus, his tattoo of Ganesh has him literally slicing off the third eye, wielding a sword with his trunk, which metaphorically translates to Travis "cooling out" and being less aware so that he can enjoy life more.

Travis has eight tattoos, which includes a full sleeve, all by artist Brad Stevens at Dare Devil Tattoo in New York City.

Thanks to Travis for sharing this interesting interpretation of Ganesh with us here on Tattoosday!
Posted by Tattoosday at 11:17 AM

yay wish granted! i think he's going to be my husband.

great piece! brad is one HELL of a great tattooer. he's done lots of work on me.