I met Marie outside of Penn Station last month after spotting her sleeve of naval designs. She picked this one on the inside of her upper right arm: 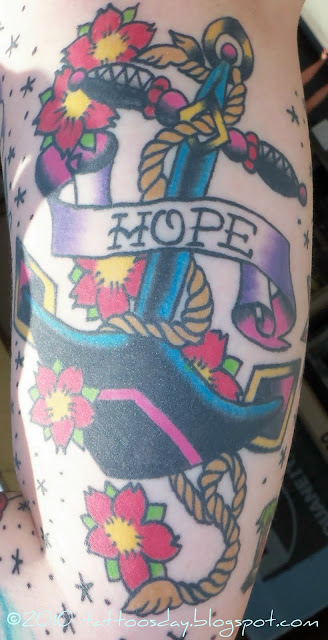 This tattoo reminds her the importance of "loving where you're from" and having "faith in where you live". The anchor and cherry blossoms are a nice blend of traditional tattoo designs from the East and the West.

The design is an allusion to a song called "Anchor and Hope,"  from the album Wall of People by alternative rock band Monty Are I, out of Cranston, Rhode Island.

Check them out in this video of them doing the song acoustically:

Marie is originally from New York, moved to Virginia, and has relocated back home to New York City.

Thanks to Marie for sharing her cool tattoo with us here on Tattoosday!
Posted by Tattoosday at 1:58 PM