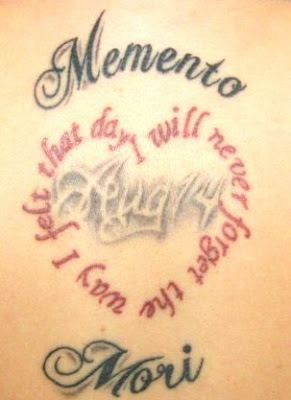 One of our readers, Linda, e-mailed me this photo of one of her tattoos back in March and we have been patiently waiting to share it here until today, August 14, which is an integral part of the tattoo.

I'll let Linda do most of the talking:


"This is a tattoo that has an extreme amount of meaning to me. It is in remembrance of my grandmother, and as far as I'm concerned is a work in progress. The heart reads "I will never forget the way I felt that day," reminding me of the day, and the way I found out [about] my grandmother's passing who, along with my mother and my grandfather, was one of the most important people in my life, and still is. "Memento Mori" is a Latin a phrase which was said to Roman generals who would parade through the city after a battle to remind them that tomorrow is another battle, they may have been victorious today, but must remember they are only mortal. August 14 is the day that she died...

...The first installment of this tattoo was done on my birthday in June [2009] and the second part, the date, I saved to be done on August 14, 2009, the 10-year anniversary of her death. This tattoo is on my back between my shoulder blades..."

The artist who inked this is Curtis Richter, and he co-owns and manages Art N Soul Studios in Allentown, Pennsylvania.

Thanks to Linda for sending this our way, and waiting patiently for us to post it. We here at Tattoosday are wishing you strength as  you recall the anniversary of your grandmother's passing.
Posted by Tattoosday at 8:40 AM