I spotted a whole lot going on with Renae's left forearm, while browsing at the Chelsea Salvation Army store, so I just had to ask. 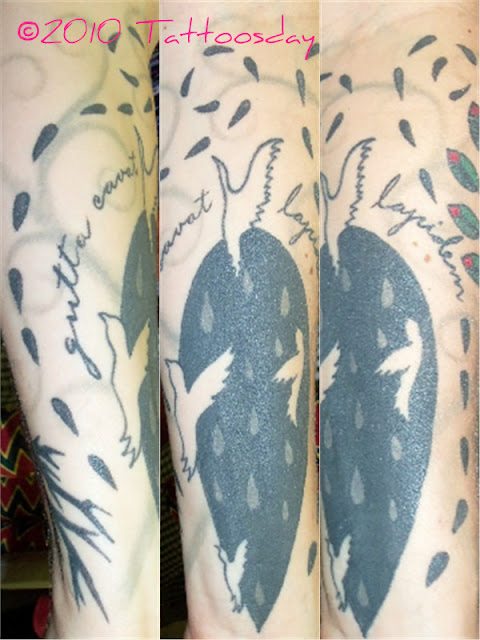 The first part of this tattoo is the dark heart on the inner part of the forearm. Renae attributes this to Rob at the Orlando branch of Hart and Huntington. In over three years of inkspotting, this is the first piece on Tattoosday that has been credited to one of their shops.

Renae, who has "no idea" how many tattoos she has (which is synonymous for "too many to count"), wanted to add to her arm, so she headed to Brooklyn Ink in Bay Ridge.

Alex Franklin was given free reign, according to Renae. Her exact quote was "use your imagination and run," which must be music to many a tattooists ears.

Alex did the flourishes around the original tattoo, along with the phrase "gutta cavat lapidem," a Latin phrase by Ovid which translates to "dripping water hollows out a stone," which is a shortened version of the line "Dripping water hollows out stone, not through force but through persistence." This quote is known to many New Yorkers who have seen it inscribed underground here (with a broader description here).


And he tattooed the piece on the other side of the arm:

Work from Brooklyn Ink (and a lot by Alex) has appeared previously on Tattoosday here.

Thanks to Renae for sharing her tattoos with us here on Tattoosday!
Posted by Tattoosday at 6:33 AM