A Patriotic Tattoo for Patriot Day 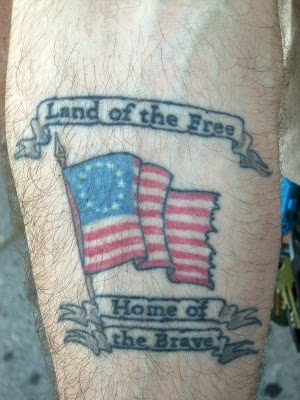 I ran into Rob in my neighborhood in late August and he gladly shared his patriotic tattoo.

Rob is a Revolutionary War buff and has a distinct interest in American history.

He wanted an "old school" tattoo back in 2000, and wanted something patriotic back "before it was fashionable". He's referring of course, to the explosion of post-9/11 red, white and blue ink. He wasn't disrespecting or being critical of patriotic tattoos done after 2001, he was merely clarifying for me that his piece was not a product of the huge wave of emotion that surged through the country after that day of infamy seven years ago.

Rob's "Land of the free, Home of the brave" banner with the original 13-star flag was inked by Darren Rosa at Rising Dragon in Manhattan. Work from Rising Dragon has appeared on Tattoosday previously here.

Thanks to Rob for sharing his red, white, and blue patriotic tattoo with us here on Tattoosday on this occasion.
Posted by Tattoosday at 12:09 AM