Only God Can Judge Him 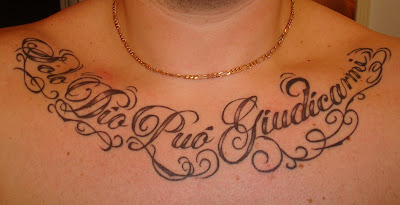 A nice surprise last night when, out of the blue, a previous Tattoosday subject, John, sent me his latest tattoo.

I met John initially at the 3rd Avenue Festival in Bay Ridge, back in the earlier days of the blog, where he displayed a leg piece in progress here.

He later had the piece finished and we featured it, in all its glory, here. In addition, he sent me photos of his other three tattoos here.

But here is something new from John, who I haven't seen in a while. He explained this new tattoo via e-mail:

[It] says "Solo Dio Puo Giudicarmi" ... which means [in Italian] "Only God Can Judge Me"... I got the tattoo for religious reasons and for another one ... nowadays people give a shit too much about what other people think and try to conform to be like everyone else just to blend in. [The tattoo] is a reminder to me and to all that read it, regardless of belief: just be who you are. Because, in the end, it does not matter what anyone else think of you, but you.

Thanks again to John for sending this my way! We always appreciate return visits from previous Tattoosday subjects!
Posted by Tattoosday at 7:15 AM

Dude, more changes to the site? I like it man, the yellow colour really takes away the harshness on the eyes =]
I love this tattoo, it's got a great story behind it, and it looks fantastic. It's pretty much the same font as my "Nevermore" tattoo by Paul at Inkslingers =] Love it man!!!