Two Tattooed Tourists on a Tuesday 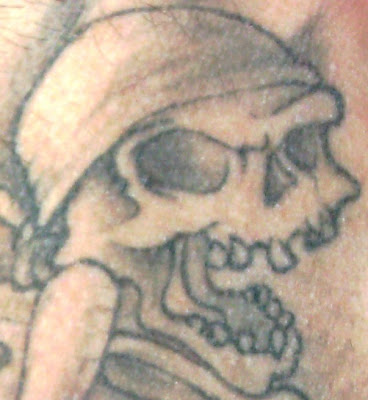 Sometimes the hand of Fate guides the Tattoosday blogger as he journeys through the streets of New York. At lunch, a change in traffic signals prompted me to veer East, sending me into a bank vestibule that I rarely, if ever, frequent.

I could have ventured into a dozen branches or drug stores to do my business but this is where I ended up on a day that started frigid, but was still in the blustery high 30's at noon.

I finished my ATM transaction and exited, not even glancing at the two people to my left, jacketed and weighed down with large backpacks.

I hit the sidewalk, peering into a side window bordering the vestibule. I did a quick about-face and headed back into the bank. Despite the coats, hats, and long pants, I could tell the two men I had been next to had significant ink.

And, once back inside, I was delighted to find them both willing to talk tattoos.

Both men were visiting tourists from England. The first one I spoke to was Jethro "Jeff" Wood, a tattoo artist who works out of The SkynYard in Southend-on-Sea (in Essex County, 40 miles East of central London). I spoke to Jeff first, while his friend Sam worked the ATM machine.

Jeff estimates that his body is 30% covered in ink. He offered up this neck piece: 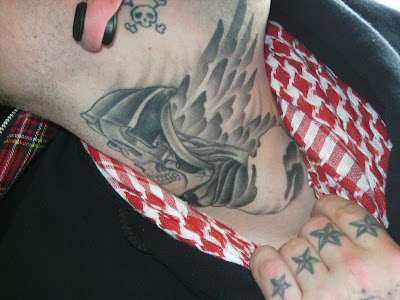 I apologize for the angle, but one can see that it's a pretty nice grim reaper tattoo. You also get a view of the small skull and crossbones behind Jeff's left ear.

He had been hanging out with another tattooer and "got drunk and tatted my neck". The artist was Dan Sims at Life Family Tattoo in Sevenoaks, Kent, in England.

Not to be outdone, Jeff's friend Sam had an amazing pirate-themed neck piece, with a "Do or Die" banner, courtesy of Jeff: 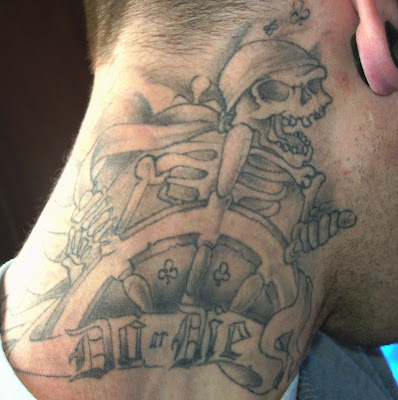 The two visitors seemed to enjoy showing their tattoos and were soon rolling up pant legs to show me what Jeff's apprentice, Charlie, had tattooed on the back of Sam's left leg: 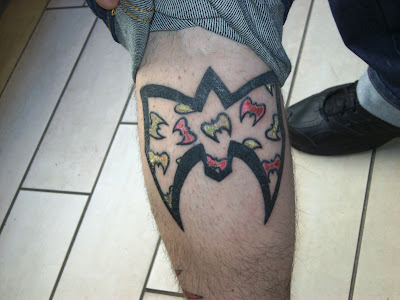 That is the mask of The Ultimate Warrior. 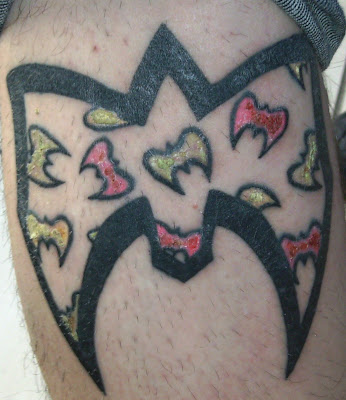 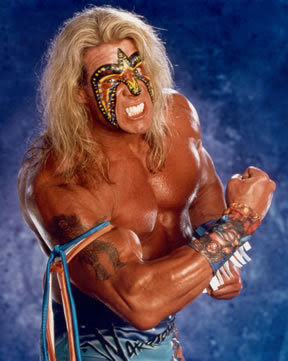 Sam also showed me some work on his right leg, also credited to Charlie, featuring a mythical creature, "The Rare Horned Dolfin," stuffed and mounted by a taxidermist: 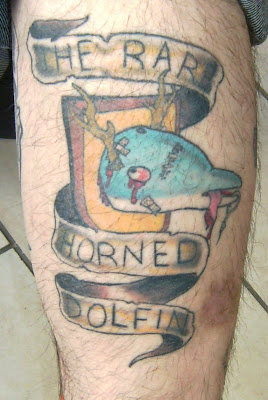 Granted, it's a funny tattoo, but I believe there was an element I was missing (perhaps a key facet of an inside joke). Sam and Jeff laughed heartily while showing me the piece, along with another gag tattoo on Sam's right calf, a D.L.T. sandwich: 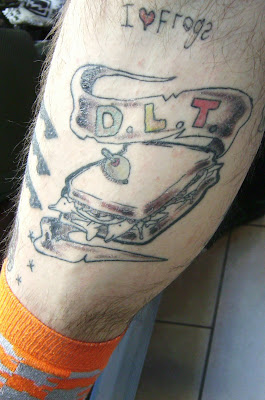 In a DLT sandwich, the bacon is replaced by, you guessed it, tiny smiling dolphins! 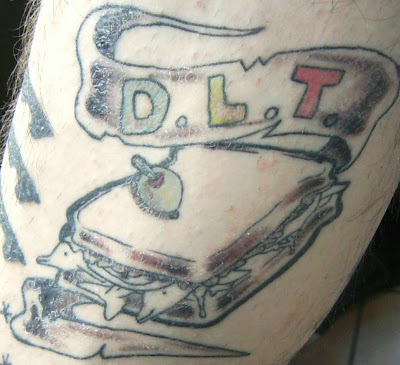 I also get a kick out of the "I love frogs" scribbled above the D.L.T. Note the S is reversed. Sam indicated that Charlie had done some of these, but he had also inked a few himself, on an experimental basis.

Both men also have knuckle tattoos, and pictures of their knuckle are posted here at KnuckleTattoos.com.

Thanks again to Sam and Jeff for sharing their tattoos with us here on Tattoosday!
Posted by Tattoosday at 12:27 PM