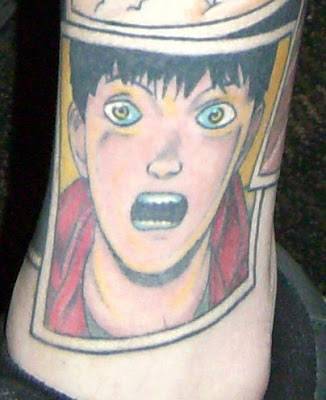 This was, of course, the New York City Tattoo Convention, which I attended a couple weeks ago (see the brief recap here).

Having decided not to collect many posts and photos for the blog (I had settled on this one), I found myself chatting with Phil, a co-worker of mine, after he spotted me among the masses.

It was while we were chatting, adjacent to the snack area, that I noticed we were being watched. Just to our right, this image greeted us: 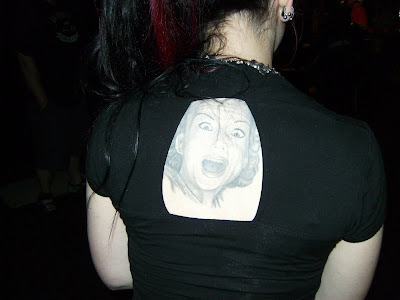 This is Janet Leigh, in her iconic role in Alfred Hitchcock's Psycho. Not only is this a masterful portrait, but it was framed beautifully by the cut-out portion of the dress worn by the woman who had this tattoo. It was as if the artist had positioned the tattoo with this dress in mind. 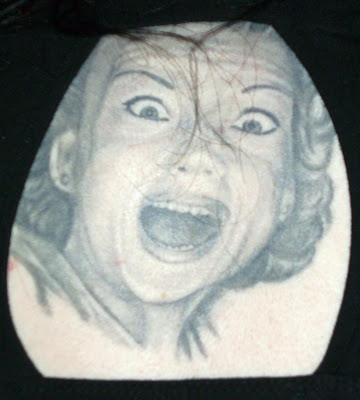 So I introduced myself to the woman who owns this piece. Her name is Marie and she is from Montreal. She got this tattoo because she liked the picture. And that's all that I got from her.
I would have learned more, but the room was loud and I had trouble understanding her. Her English was certainly better than my rudimentary high school French, but the environment made it difficult to pick up what she was saying.

However, shortly after our conversation began, a couple of gentleman rejoined her and one happened to be the artist of the tattoo in question.

His name is Stéphane Bérubé and he is an artist out of a shop called Tatouages Libre Expression, in Saint-Eustache, a northern suburb of Montreal, Quebec.

He was very friendly and introduced me to the other person he was with, who was one of his clients as well.

With little prompting, this guy rolled up his left pant leg to reveal a sleeve Stéphane had done, comprised of bright, multi-colored cartoon panels:

The owner of the tattoos explained that he had brought a graphic novel to Stéphane, telling him it was one of his favorite books growing up. They extracted different panels to make a cohesive combination of segments that make up the whole of the sleeve.

It is phenomenal work and I thank Stéphane and his friends for allowing me to photograph their tattoos!
Posted by Tattoosday at 6:37 AM

The graphic novel is Katsuhiro Otomo's classic manga from the 80s, Akira, about a hyper-evolved boy in a future dystopia. Probably the greatest epic manga ever.