Emily's Back Piece Takes Yin and Yang to the Next Level 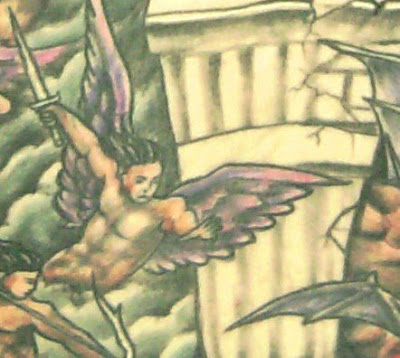 I spent yesterday at the New York City Tattoo Convention at the Roseland Ballroom.

I'll provide a fuller dispatch later but I wanted to share one of the more visually-stunning pieces that I chanced upon.

This is Emily's back piece: 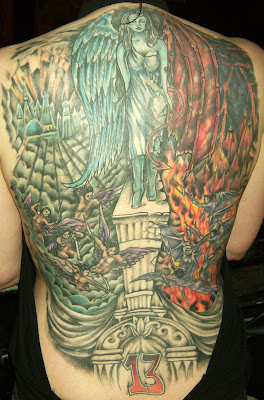 This represents about sixty (60!) hours of work by Erick Diaz at Asylum Studios in the Williamsburg section of Brooklyn, New York. A smaller, much less complicated tattoo by Mr. Diaz appeared last summer here on Tattoosday.

What's depicted is the classic battle between good and evil, angels and devils, heaven and hell. Emily went to Erick with the basic concept of the piece and Erick did the rest.

"It's the state of every human being," Emily summarized, "a giant yin-yang".

The "13" at the bottom of the back is a memorial, of sorts, but Emily didn't want to elaborate. She also noted that this elaborate piece covered up two smaller tattoos at the top of the back.

I thank Emily for sharing her marvelous canvas with us here on Tattoosday!
Posted by Tattoosday at 6:25 AM