I was walking down 31st Street in Manhattan when a woman walked by with a hummingbird and flower on her left shoulder. I turned back to talk to her and I was stunned to see a bright colorful tattoo spanning the top of her back> I called after her and had a nice chat.

To my delight, Renee was my familiar with the site, as her artist, Joy Rumore, had just been featured on Tattoosday here. Taking a photo of the tattoo in question was not possible due to the presence of clothing covering sections of it, but I gave Renee my card and asked her to keep in touch. However, after a few messages on Twitter, not only did I have the link to photos of the tattoo from the artist's blog, I also had an open dialogue with Renee, who explained the tattoo for me.

As Joy says on her original post here, "All hail the mighty Kukulcan!": 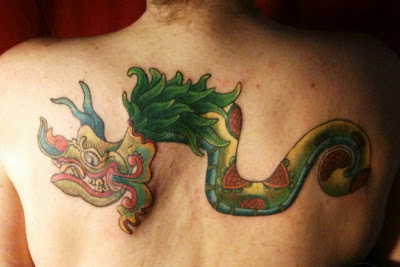 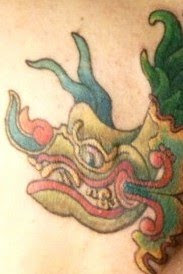 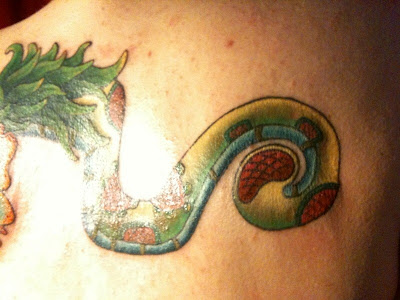 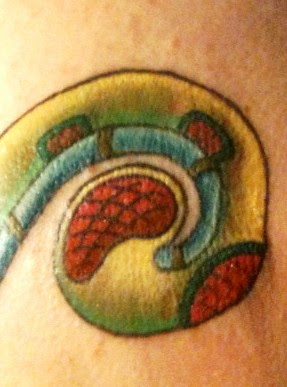 I asked Renee to elaborate on why she got this incredible tattoo across her back. I'll let her words speak for themselves:


"I got this feathered serpent tattoo when I advanced to candicacy in my doctoral program where I study Aztec art. I think we did it over three or four 90-minute sessions ... The feathered serpent was an old Mesoamerican god, a version of which dates back to the Olmecs (about 400 BCE) and is seen at a number of Mexican sites like Teotihuacan, Chichen Itza, Tula, and the Templo Mayor in Mexico City. The Aztecs called him Quetzalcoatl which translates from Nahuatl (their spoken language) into bird-snake. Joy refers to him on her blog as Kukulcan, which is the version that is seen at Chichen Itza in the Yucatán.

I wanted a tattoo of a feathered serpent because he so relevant to the Aztecs and they took great care in carving beautiful stone images of the animal.  I also knew of Joy's penchant for amazing feather work, and I knew this would be a good match.  I brought Joy a series of images, one from a mural at Teotihuacan, one from a Mixtec manuscript and another of an Aztec stone carving of a feathered serpent.  She used those and her knowledge of imagery from the Yucatan to create a more composite image of the god."

A huge thanks to Renee and to Joy at Twelve 28 Tattoo for their cooperation in making this post possible!
Posted by Tattoosday at 6:21 AM