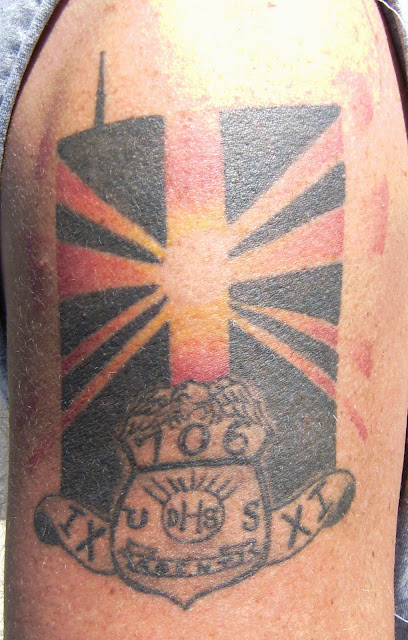 The tattoo is a poignant piece, with the sun shining between the towers. Below is Paul's badge from the Department of Homeland Security, which has evolved into U.S. Immigration and Customs Enforcement (ICE). Particulatly unusual is the depiction of 9/11 in Roman numerals:

I don't believe I had ever seen it represented that way before.

We here at Tattoosday send our thoughts and prayers to all the families of  people who died on 9/11, and to the families of all of the men and women who have died since then, serving our country.


If you are reading this on another web site other than Tattoosday, without attribution, please note that it has been copied without the author's permission and is in violation of copyright laws. Please feel free to visit http://tattoosday.blogspot.com and read our original content. Please let me know if you saw this elsewhere so I contact the webmaster of the offending site and advise them of this violation in their Terms of Use Agreement.
Posted by Tattoosday at 6:54 AM