Late last month, I received an inquiry from Amy MacLennan about the Tattooed Poets Project. April was already full, but she was kind enough to agree to be another Tattooed Poet o' the Week. Check out her work: 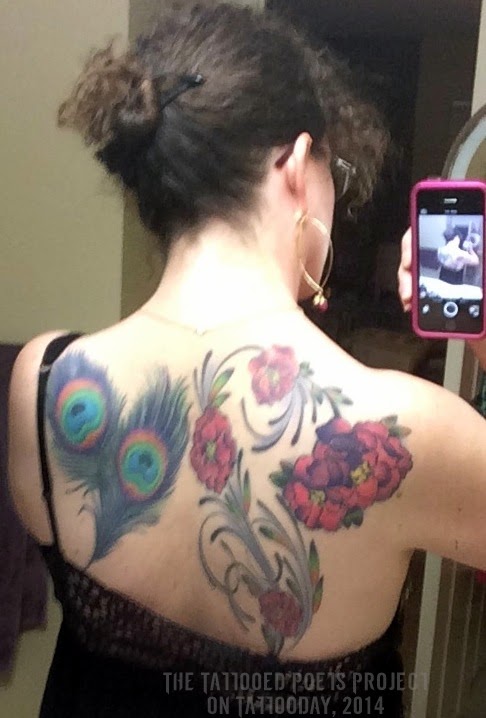 That's a mirror image and is a little blurry, so let's take a close look and hear about the work. 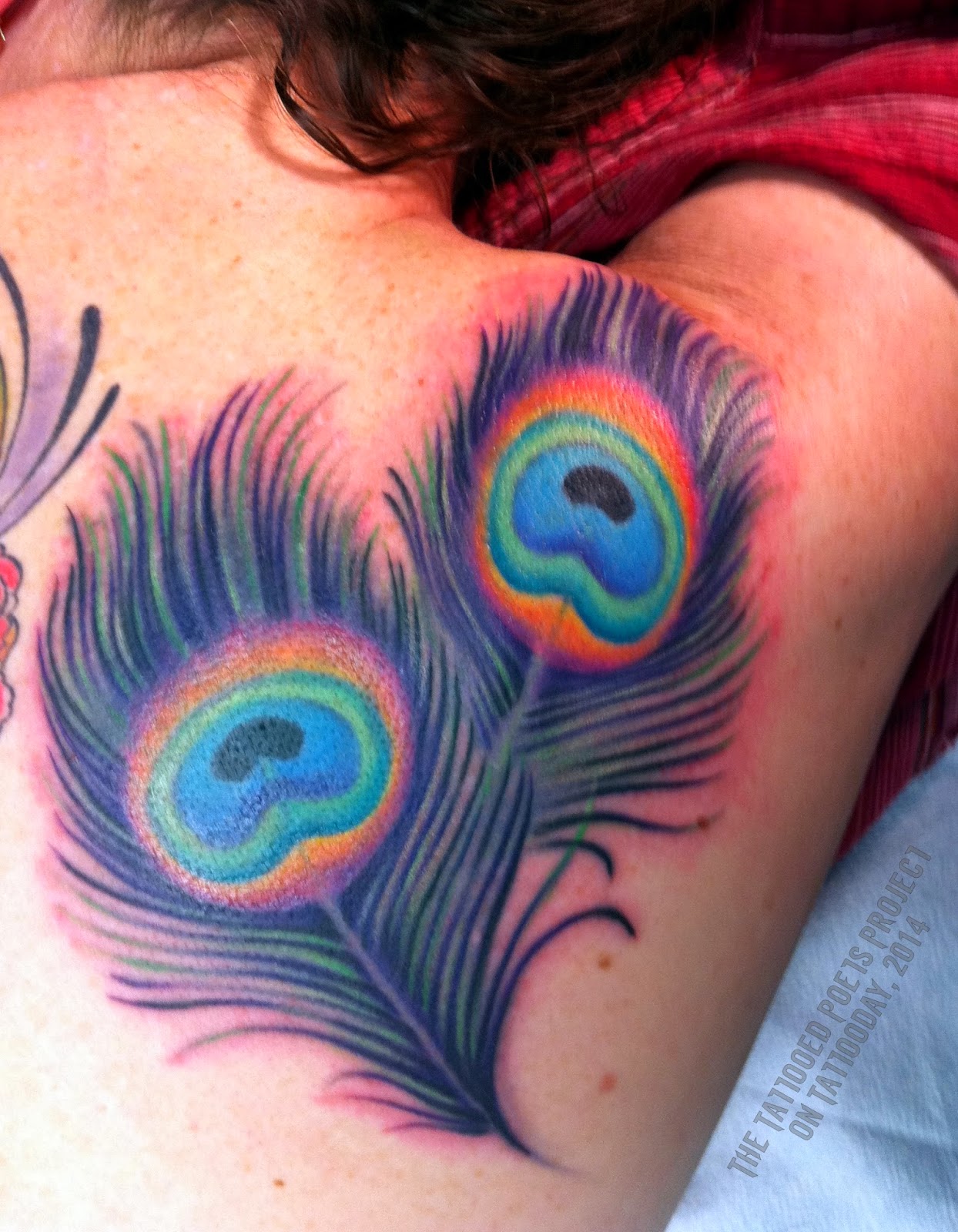 "The original tattoo was done in a London studio by the artist Bugs in 1992. He agreed to do the design freehand with the stipulation that I brought him a peacock feather. I was working in a cheap youth hostel at the time, but a friend managed to find the feather for me. I remember that Bugs told me to drink a lot of water and eat something sugary after. I drank a blended mango drink and then had a good cry with a friend, and later that night got drunk on stout. The tattoo has had two color touch-ups, but I've never had the design changed."

Bugs is a phenomenal artist who is respected worldwide. We've featured some of his work before when we've spotted it at the NYC Tattoo Convention in years past (most recently here).

The floral part of her back is actually comprised of two different tattoos of flowers: 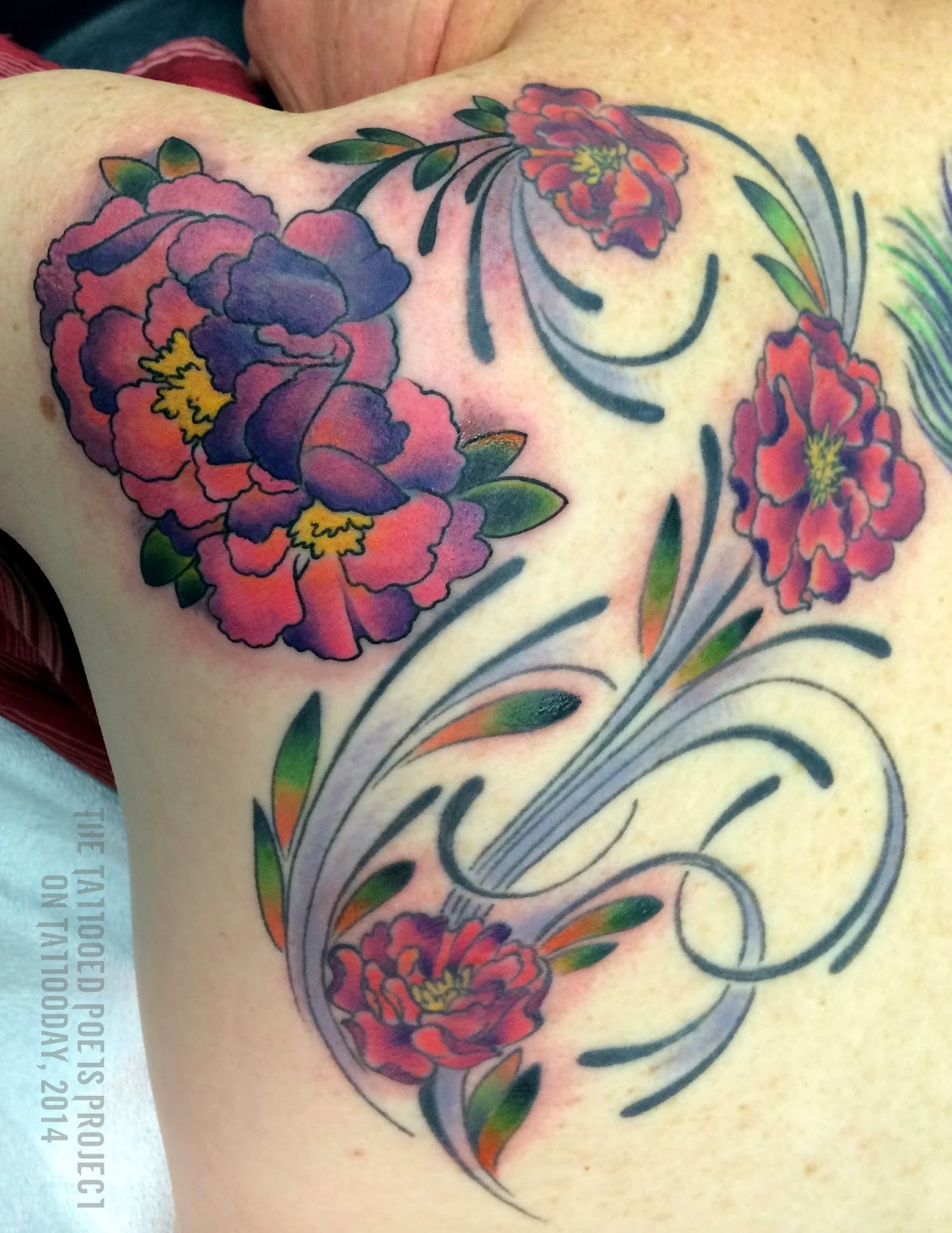 Amy told us that the small flowers were tattooed in 2012 "by Kory Kidd at Epic Ink in Medford, Oregon." She explained, "I wanted something flowery and red/coral toned. Kory worked with me endlessly to get the design and color right."

As for the large flower, she elaborates:

"In 2013, Kory added this one. I wanted to cover a small, grey salamander that I'd had done in the Fillmore in 1990 when I was young and desperately stupid when it came to tattoos. My intentions for a first tattoo had been good, but my choice of tattoo artist was not. I needed more color and balance to the work already done."

If Amy wasn't generous enough to share her tattoos, she also gave us a poem, which originally appeared in February 2014 in the 30/30 Project from Tupelo Press:

You kiss the top of one shoulder,
a run of your lips across the strip
where my bra strap hits.
I trace circles at the place
your fingers meet your hand,
stroke the mild webbing there.
A dainty scorching
of each other's skin,
such a delicate devouring.

Thanks to Amy for contributing to the Tattooed Poets Project, beyond April, here on Tattoosday!


If you are reading this on another web site other than Tattoosday, without attribution, please note that it has been copied without the author's permission and is in violation of copyright laws. Please feel free to visit http://tattoosday.blogspot.com and read our original content. Please let me know if you saw this elsewhere so I contact the webmaster of the offending site and advise them of this violation in their Terms of Use Agreement.
Posted by Tattoosday at 6:45 AM