Eugenia and A Letter (Tattooed Poet of the Week)

Our tattooed poet of the week is Eugenia: 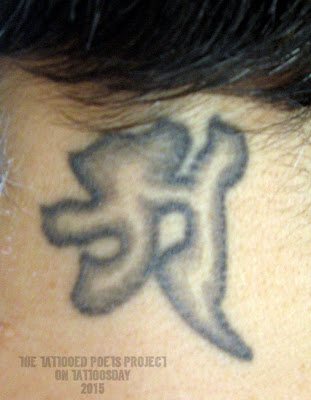 "I had been thinking for some years about getting a tattoo using sacred text of some kind. I believe it is the path of the poet to serve as an alchemist of language, so I felt myself drawn as a writer more toward a language-based tattoo rather than a strictly art-based one. I was thumbing through a book by John Stevens entitled Sacred Calligraphy of the East, when I saw the Siddhaṃ letter A, and I knew I had found my tattoo. Siddhaṃ is the name of a script used for writing Sanskrit during the period ca 600-1200 CE, and is descended from Brahmi and Gupta script. Of my particular seed syllable the text states:

'A is the first and most important of the Siddhaṃ characters. It is the source of all vowels and consonants; it includes and is included in every sound produced by human beings. Hence, in both a physical and spiritual sense it is the origin of all elements. It is the seed character of Mahavairocana (Dainichi Nyorai), the supreme Buddha who manifests the unity of all phenomena. A is uncreated, the primordial form of existence.'

I received my tattoo by a young man working at Lovedog Tattoo in Soquel, California in 2000."

Eugenia sent us the following poem, which said her "relates best to this tattoo [and] is a poem of transformation, with images that are Buddhist in nature ... previously published in Chiron Review.

I came to believe in darkness
the tumbling down to truth

a silver pearl at the center of each battered heart


*“Shing”: Tibetan for “field,” “good place,” or “realm,” and sometimes refers to a Buddha’s paradise.

Eugenia lives and writes in the Pacific Northwest. Her work has appeared in MonkeyBicycle, Cascadia Review, The Gambler Magazine, The Found Poetry Review, Literary Orphans and elsewhere. A chapbook of her prose poems, Pamyat Celo/Memory Village, was published in 2007. She is also an analog photographer and loves working with Mod Podge.

Thanks to Eugenia for sharing her tattoo and poem with us here on the Tattooed Poets Project on Tattoosday!

Posted by Tattoosday at 4:58 AM