No offense to people with tribal tattoos, but they (the tattoos, not the people) generally don't generate much interest from me.

Unless they are incorporated into a bigger design concept (like this tiger lily piece), they don't seem particularly interesting. I know, I know, that's a sweeping generalization, and there will always be exceptions.

But tribal arm bands, anklets, or lower back designs are just that: designs. Often aesthetically pleasing, sometimes not. These tattoos (again, generally) are more about the look of the piece and the desire for a tattoo, than about a deep meaning about a specific person or event. Sure, you may have got that tribal piece to commemorate the time that your dog Lassie saved your son Timmy from a rattlesnake in the bottom of a well, but how does such a blogworthy event translate into an inked pattern?

But, I digress. The title of this post is "April's Tribal." On occasion, a tribal piece does call out to me, as April's did last Friday at the 86th Street subway platform in Bay Ridge. Again, there is no earth-shattering story behind it, and had it been smaller in scope on an ankle or lower back, I may have kept walking.

But April's tattoo is bold and striking: 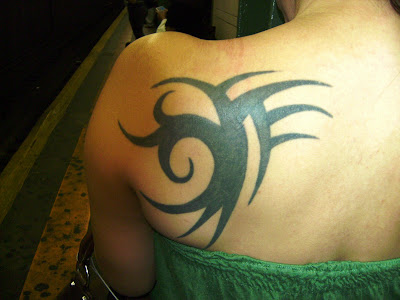 She had this inked in Los Angeles in the early 1990s, by a friend with whom she has lost touch. He was just starting out as a tattooist.

She had initially envisioned having a short sleeve, but after the initial back piece was completed, she just never finished it off. April didn't seem too concerned, though: "It's on my back, so I never see it," she smiled.

Thanks to April for sharing her tribal piece with us here at Tattoosday!
Posted by Tattoosday at 5:31 AM

I'm with you; I find most tribal tattoos quite unimpressive. They're usually just so generic that I don't know whether to wince or yawn when I see them.