Tattoosday at the Mall, Part 1 - Kevin Wears His Son on his Sleeve 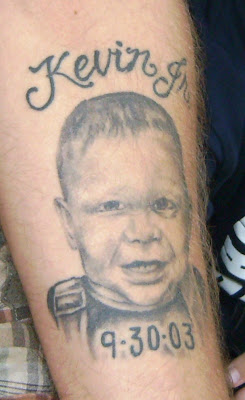 I had the chance to chat with Kevin (and Kevin Jr.) as we all waited for the women in our lives do some serious shopping damage at the Limited Too store at the Roosevelt Field Mall on Long Island.

Kevin has about 10 tattoos in all and he had this piece inked about two years ago. Kevin Jr. acknowledged he liked that his portrait was on his dad's arm. Kevin Sr. added, laughing, "Let's see how he feels when he's older!"

Kevin and I talked tattoos for ten or fifteen minutes while we waited for the shopping to end.

This portrait was inked by Tim at The Red Parlour in Woodside, Queens. Kevin has known Tim for many years and he has had all of his work done by him.

Thanks to Kevin for sharing his son's portrait here on Tattoosday!
Posted by Tattoosday at 5:33 AM