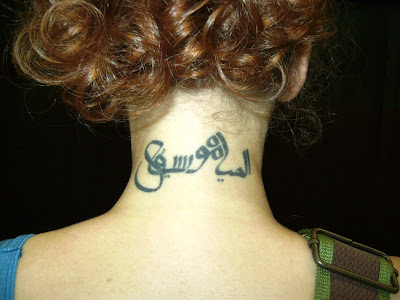 I introduced myself to Thea on the 86th Street train platform after spotting her awesome neck tattoo.

There's something about the train platforms and subways of New York that is a challenge to Tattoosday. Generally, when New Yorkers descend to the subway system, an additional layer of protective on-guardness (I know it's not a word, but it nails the sentiment) is added. For this reason, I generally leave the inked alone. But like every "general rule," an awesome tattoo trumps everything.

So I snapped the photo of Thea's neck on the platform, and we chatted briefly there and on the R train after it rolled in.

The piece is in Arabic, featuring the two words for "life" and "music". Although not an exact translation, Thea interprets the juxtaposition of both words as "life is music". She acknowledges it is not a precise translation, but that it is the meaning she derives from the piece.

Thea is a singer, and music is an essential part of her identity. I must agree, it is an apt choice for ink, and I personally believe that Arabic is one of the most beautiful languages, as written. The way that Arabic is incorporated into Eastern art is unparallelled.

The tattoo was inked at Porcupine Tattoo in Brooklyn.

Thanks much to Thea for sharing this awesome neck tattoo with us here on Tattoosday!
Posted by Tattoosday at 4:52 AM