Chris Wears His Knife on his Sleeve 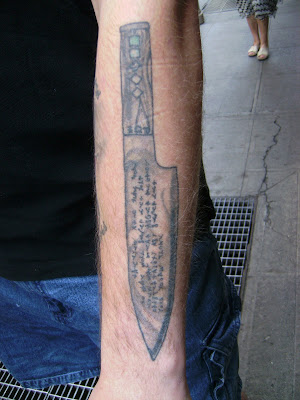 On Wednesday I met Chris, outside of the hotel across the street from my office. He sported four tattoos in all, but this one was the most fascinating.

Chris was in town (he resides in Ripon, California) on business as the tour caterer for Neil Diamond (he has also worked for Tim McGraw, Faith Hill, and others).

The knife, on his left forearm, is a portrait, one could say, of his own chef's knife.

Clearly, most chefs have a connection to the tools of their trade. I would imagine that a favorite knife would be near and dear to one's heart. Chris' tattoo is testament to that fact.

Chris actually takes this portrait a step further and incorporates other elements into the knife tattoo. Their are markings on the knife that appear almost like runes.

This is actually written in the Cherokee tongue, a tribute to his heritage (his father is Cherokee). When I asked if he could tell me what was inscribed in the blade, he smiled and shook his head. He doesn't disclose the deeply personal nature of the message to anyone.

One additional element that I would have not noticed had he not mentioned it are the geometrical shapes on the hilt of the knife.

Chris explained to me that he is a snowboarder as well, and each shape represents the trail marking symbol for a slope that he has conquered while boarding.

Chris told me that this unique piece was inked by Craig Foster at Skinwerks Tattoo and Design in Carrollton, Georgia (about 50 miles from Atlanta). I was excited to hear this as Craig's work has appeared on Tattoosday previously here. His work is phenomenal and I am fortunate enough to have come across his ink up in New York. Check out their shop site here and see what other amazing work they do there.

Thanks to Chris for sharing his "tat-tool" of the trade with us here at Tattoosday!
Posted by Tattoosday at 6:22 AM