What Doesn't Kill You Makes You Stronger 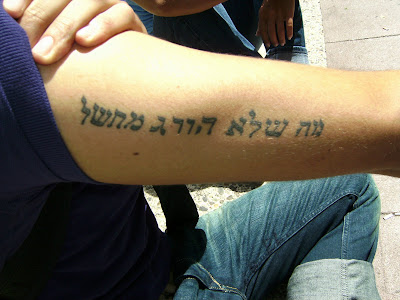 I ran into Enrique in front of the Borders at Penn Plaza, a prime tattoo-spotting location, as regular readers of Tattoosday know.

He sported three tattoos, including this fresh replica of his wings from the Air Force, where he was an E3 Airman 1st Class: 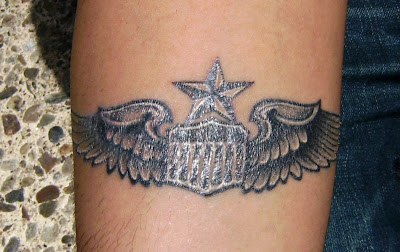 Here's a sample of what this tattoo is based upon: 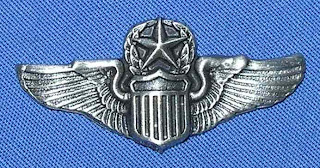 This piece, along with the others, was inked by Sandy at Body Art in Manhattan. When the picture was taken, the ink was still drying, having been tattooed only a few days earlier.

מה שלא הורג מכשל
A nod to his father, who was in the Israel Defense Forces, the Hebrew translates to "what doesn't kill you makes you stronger". Interesting, there's a whole discussion of this phrase in Hebrew here.

Enrique's third piece is still a work in progress, so is not pictured here, but the central element seems to be a traditional naval anchor in the middle of his left forearm.

Thanks to Enrique for taking the time to talk to me about his ink, and sharing it here on Tattoosday!
Posted by Tattoosday at 5:44 AM

It's funny that an Enlisted E-3 would get a tattoo of Officer's Pilot Wings on his arm. Was he headed to Pilot training?

Awesome tat Enrique. I too am looking to get "What doesn't kill you, only makes you stronger" tatted on my forearm. However, there seems to be a lot of discussion about how it should be written in Hebrew.

I myself don't read or speak Hebrew so I want it written the correct way. I am told that it should be written מה שלא הורג מכשל. But by looking at the one in the picture it looks like the the 3rd letter from the end is different (reading it right to left).

Anyone have any clarification on who has the correct spelling?

Yeah...first off, flight wings like that are only given to pilots. Only commissioned officers are pilots, and the star on top of the wings indicates a pilot that has been one for at least seven years and logged over 2000 hours in the cockpit.

So seeing as this guy is an E-3, this means he is enlisted and has probably been in the military for less than three years. Meaning he isn't a pilot, but has the pilot wings tattooed on him nonetheless. Interesting.

This might be 2 years two late, but to Daniel's question, the correct spelling is exactly what Enrique has:

The other spelling is incorrect.

Enlisted members do, in fact, earn wings. As an AF member with over 6000 flight hours I think I've earned them. However, Senior Pilot wings are given to pilots...even if the E3 earned a pilot slot he definitely would not have a star!