Normally, I've been posting chronologically, but Sunday night at a Brooklyn Cyclones game, I spotted the tattoo above, and talked to its host Lauren, in the pre-game rain delay.

My fliers were soaked, but she shared her awesome tiger lily tattoo with me.

Lauren says she's had an affinity for tiger lilies ever since she was a kid because they are orange and have "freckles". 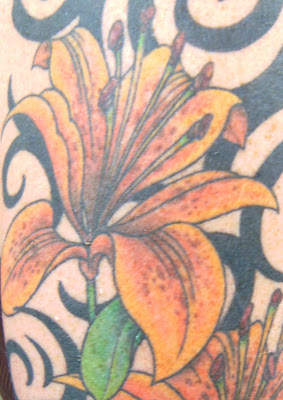 As one would imagine, Lauren has red hair and freckles, which explains the connection.

The piece was inked by Jesse Roberts at Lucky Devil Tattoo Parlour in Seattle.

Thanks to Lauren for sharing her awesome tiger lilies with us here on Tattoosday!

And the Cyclones won in 10 innings, beating the Batavia Muckdogs 6-5.
Posted by Tattoosday at 6:10 AM