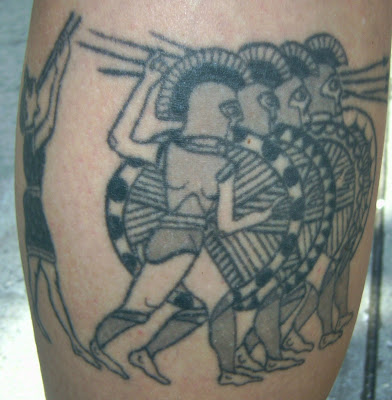 As you may have guessed from the title above, this is an educational post.

Anna has four tattoos, but it was this one, on the back of her left calf, that caught my eye as she passed me on Seventh Avenue last week. I stopped to ask what this was all about. And I felt like I was back in the classroom. Absolutely fascinating!

This piece is based on the art found on the Chigi Vase: 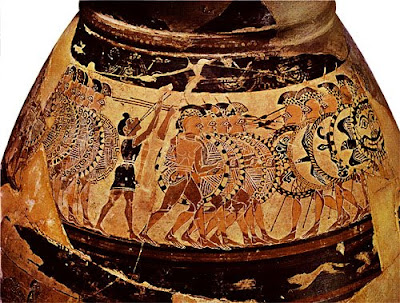 So why is the Chigi vase, a piece of Corinthian pottery dating back to around the 7th century, B.C., important? Anna explained that it is on the vase that the first artistic representation of the Hoplite Phalanx formation appeared. Or, the earliest surviving representation. It is in this battle formation that soldiers are lined up in such a way that the soldier next to them uses their shield to protect their neighbor. The economic formation proved very effective and it was an important step in democracy, as a group of soldiers banded together to form one cohesive unit.

Anna is an alumna of Reed College in Portland,Oregon, where she studied the Classics. I didn't mention to her at the time that I was a graduate of Occidental College in Los Angeles, a similarly small liberal arts college where there is a deep tradition of teaching the Classics. So, I got why she had this tattooed on her, not to mention how nicely done it was in the first place.

Aside from the liberal arts background, I also related to Anna on the level that she is originally from the Central Coast of California, near San Luis Obispo. Although my connection to California is in L.A., to the south, I still have 12 years of life in the Golden State ingrained in my identity.

This segues to the piece on her left arm, a watercolor-like tattoo of a plant:

This is in fact, a strawberry plant, which is an integral part of the agricultural identity of the central section of California. The tattoo is based on the watercolors first recorded in what is known as the Clutius Manuscript, a 16th Century work of early botanical paintings. You can check out the link below for more information on this collection.

Anna, who also blogs here about her adventures with fresh vegetables and fruits in New York City green markets, had these tattoos inked in Portland by the artist Amy Cole. Ms. Cole works out of Tiger Lily Tattoo and Design.

Thanks to Anna for sharing her cool (and thought-provoking) body art here with us at Tattoosday!
Posted by Tattoosday at 7:49 PM

Wow. I've known Anna a long time, and I didn't even have this much background on her tattoos. Your blog is informative and excellent!

WOW I found her! I saw this tattoo on a woman around the NYU campus sometime last year and have loved the idea ever since! I've been looking for examples of the ink and what do you know, I find the original! Cool stuff. I love the pottery representation. It's something I would definitely consider-