Last Saturday I was riding my bike on a gorgeous day (see this post here) when I passed Erica who was sitting on a bench along the Shore Promenade.

I spotted a tattoo on her back as I rode by, so I circled around for a closer look: 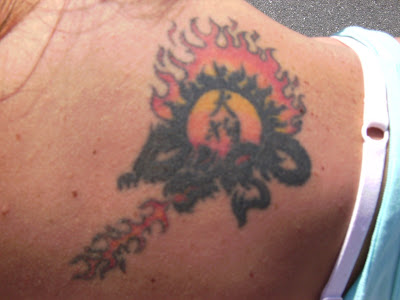 It seemed interesting so I asked her about it. She said there really wasn't anything interesting about it but I told her to try me. Sometimes when you've lived with a tattoo for a while, the circumstances surrounding the piece seem ordinary. But to a fresh set of ears (and a blogosphere full of eyes), the story can be fascinating.

About 12 years ago, and a year or two out of high school, Erica was dating a gang member. (See? Interesting already!) She was born in 1976, the Year of the Dragon in the Chinese Zodiac. Her boyfriend's gang nickname was "Big Dog," and not wanting to have that written in English in the tattoo, she had the Chinese translation inked in the piece.

When people asked, she would just tell them in stood for "Year of the Dragon". She notes, however, that she has received a negative reaction from the Chinese women who work at the nail salon. So, she acknowledges, the inscription probably isn't very nice.

I showed the picture to my local Chinese language expert, Kwok, who has helped me translate kanji before, and he shook his head and said that, technically, the characters are correct, but a person well-versed in Chinese would not have selected those characters to represent the name of
“Big Dog”. He acknowledged that the reaction that Erica has experienced is probably due to the elementary nature of the words. As written, it is a literal interpretation of the meanings, and not necessarily in a flattering way.

To make this piece even more interesting, the tattoo was done at a defunct Bay Ridge shop called Ink Masters (their work has appeared previously here). She noted that the guy that tattooed her was named Eric and that she knew he had been "featured" in a film called "Erica" (same spelling as her name, incidentally), which was, in fact, an adult film. Erica wanted me to reiterate, the tattoo artist had been the adult film star, not her.

Finally, to make this tattoo's tale complete, two years after she had broken up with "Big Dog," she regretted the youthful folly that had caused her to get the tattoo. Rather than laser it off, or cover it up, she chose instead to improve it by adding flames to it to represent her anger over getting it in the first place. 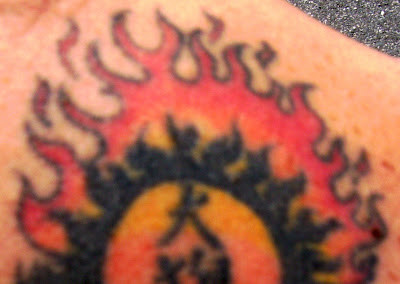 Erica then offered up a bonus: a tattoo that, to her, meant much more: 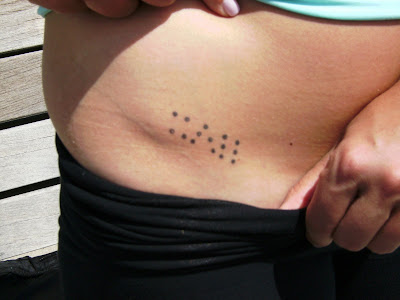 Often, asking someone about a visible tattoo is rewarded by the unveiling of a much more significant piece (see here and here for two of the best examples on Tattoosday).

The new piece above, a pattern of fifteen dots, was inked by Erick Diaz at Asylum Studios in the Williamsburg section of Brooklyn.

Erica entered the shop not with the intention to get tattooed, but to accompany her cousin Samantha when she went in for a tattoo.

Samantha has an interesting story. Many years ago, she had been a passenger in a vehicle that was involved in a drunk driving accident. She was ejected from the vehicle and hospitalized in critical condition. In a coma, Samantha faced life-threatening circumstances when her brain underwent significant swelling, so much that part of her skull needed to be removed to accommodate the condition. Ultimately though, Samantha recovered and was none the worse for wear. She currently is residing in South Africa and working as a photographer.

So Samantha was visiting her cousin Erica who took her to get a tattoo. When Samantha was getting the phrase “the sky is my only witness” inked, Erica was watching, knowing that she needed to get a new tattoo that honored her cousin’s miraculous recovery.

Which brings us back to the fifteen dots. Erica explained the code to me. She used dice as a metaphor and four rolls run together. A four and a three, along with a two and a six. The pattern is symmetrical and if you add the four and three, you get a value for 7. The two and six represent
the number 26. Erica wanted a representation of a magical date, July 26, the day when Samantha opened her eyes and emerged from her coma.

The piece is inked on the lower right side of Erica’s stomach, along the waistline. It serves to remind her about the value of life and mark the date that is so important in the lives of her family.

I want to thank Erica for her taking the time to talk with me, and for sharing her interesting stories about her ink here on Tattoosday.
Posted by Tattoosday at 4:47 AM