Untouchable is Something to Be

John had much ink and, as often happens when I ask, a previously unseen tattoo is revealed which is just as impressive as all the other visible work.

John offered up this right upper arm piece, a pin-up straddling a bomb. It's exceptional work and I found the source material on which this is based, a concert poster for the Against Me!: 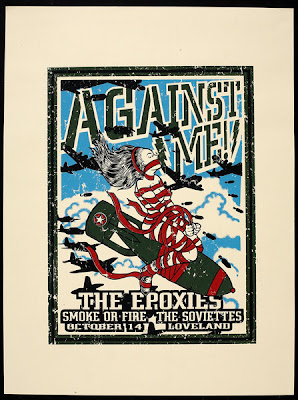 The poster is from a October 14, 2005 gig in Portland, Oregon at Loveland, with the bands The Epoxies, Smoke or Fire and The Soviettes. The designer is Lee Zeman* who is associated with the company Mad Pakyderms.

A little more detail from the tattoo:

John said that the art, and hence the tattoo, represents to him the sentiment that "untouchable is something to be". He had this done when he moved away from home, went out on his own, and started taking care of himself.

The detail in the tattoo is incredible. His wife Liz, who was with him, made sure I took a shot of the top of the piece and captured the detail and shading in the planes: 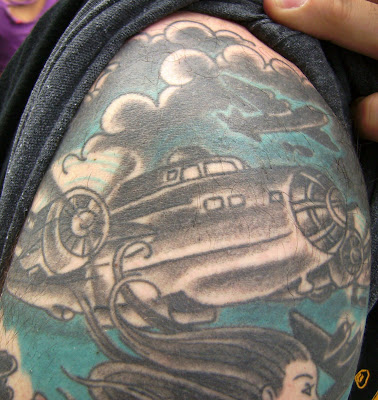 This was inked by Chance Kenyon out of Jack Brown's Tattoo Revival in Fredericksburg, Virginia.

John was on his way back home from New York where he was spending his honeymoon with his new wife Liz. See the post below to see the tattoos John and Liz got to commemorate their union.

Thanks to John for sharing his awesome tattoo here on Tattoosday!

*I initially reported that Mark McCormick designed the poster, as it was attributed to him on the poster website, Expresso Beans. I e-mailed Mark through his company's website to tell him about the post and he wrote back:

That is AWESOME!!! Thanks so much for sharing it with us. I am Mark McCormick, but Mad Pakyderms is myself and Lee Zeman. That particular poster was created by Lee. If you could credit him accordingly that would be amazing! I'll be sure to let him know about it and direct him to your site to see it for himself. I'm actually moving to NYC myself next month. Perhaps you'll see me on the street someday and ask me about my own tattoos. HA! Awesome site, man! Thanks again! Battle on!

I have amended the post to give proper credit to Lee Zeman. You can see more or Lee's work at www.gigposters.com here. If you've never checked out the gigposters site, do yourself a favor and go exploring. It's fun!
Posted by Tattoosday at 5:59 AM