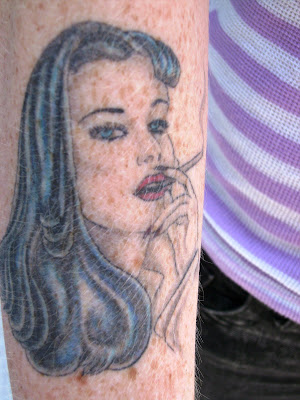 Meet Priscilla. That's her above on Maeve's arm, as seen last week on 6th Avenue. Maeve offered her to Tattoosday from among the thirteen tattoos she has. Priscilla, as Maeve calls her, is based on the pin-up art of Alberto Vargas. Check out more of his work here.

The work on which she is based initially had her as a blonde, but Maeve, made her a brunette. She also chose to have her smoking because, although she acknowledges that it's bad for you, it's still pretty cool-looking.

This beautiful tattoo was inked in November 2007 by Aryn at Twysted Imagez Tattoo Studio in Alexandria, Virginia.

Thanks to Maeve for sharing Priscilla here with us at Tattoosday!
Posted by Tattoosday at 5:46 AM