Two Tattoos From John: One for Superstition, One for Courage

Last Friday, I met John, who was in Penn Station in a t-shirt and shorts, certainly brave, considering the cold temperature outside.

He has four tattoos, and shared two with us. First, a four-leaf clover on his right elbow, which he got because he is superstitious: 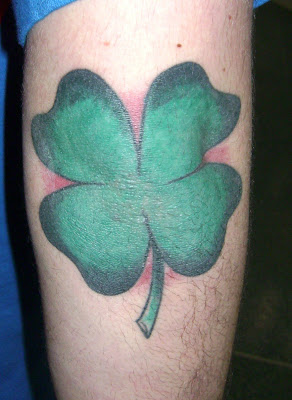 And this Latin phrase "sine metu," which means "Without Fear" on his left forearm:

Both tattoos were inked by Eric Barrett, who currently works at Orange Tattoo Company in Annapolis, Maryland. Please note, I previously attributed this to a different artists named Eric in Annapolis. My apologies for the mix-up.

Thanks to John for sharing his tattoos with us here on Tattoosday!

Posted by Tattoosday at 2:00 PM