Several months ago, one of my co-workers, Anna, wanted to commemorate the completion of her externship from culinary school.

It was funny, because at the time, she didn't realize I wrote Tattoosday and then discovered the site through googling. She stumbled upon this post that featured a chef's knife.

Anna liked the idea of using a knife, but wanted a whisk too. She spotted this piece and met with Vinny Romanelli at Red Rocket Tattoo in Manhattan, giving him the several source images she had found and explaining what she wanted.

He designed this for her and then completed the tattoo for her in about twenty minutes. She had him stick with black and gray and wanted him to emphasize the shading. This is the end result, positioned just above her ankle: 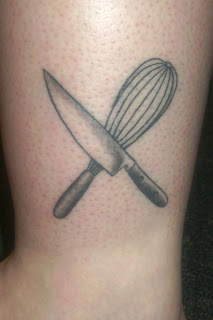 Other work from Red Rocket has appeared on Tattoosday here.

Thanks again to Anna for sharing her culinary ink with us here on Tattoosday!
Posted by Tattoosday at 6:55 AM