Kristina's Rooster Crows in Honor of Her Son

It was funny, now that you think of it, the way everything came full circle.

I was picking my younger daughter, Shayna, up from camp, when I spotted a woman approaching from the opposite direction.

It was after six, on a weekday, and she had a small boy in tow, wearing a t-shirt indicating that he was in the same camp, albeit a younger group, as my child.

She was displaying an amazing rooster tattoo, covering her upper left arm.

Initially, Kristina seemed hesitant to let me take a photo, but as we talked, she changed her mind, and let me snap away. 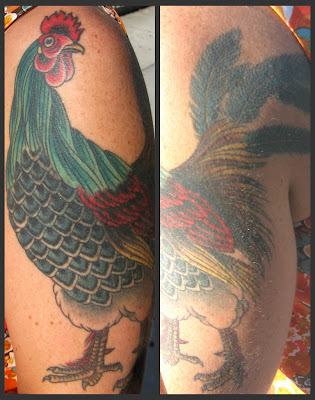 This was inked by the incomparable Virginia Elwood, who does incredible work, especially with bird tattoos. Work from Virginia, at New York Adorned, has appeared previously here on Tattoosday.

In all fairness, the right side of the tattoo is compromised in the photo above by the sun (and the bane of a borrowed camera), so the best view is the front part of the rooster:

Kristina explained that she chose the Rooster because that was the year in the Chinese Zodiac in which her son was born. It certainly is a wonderful way to commemorate her child.

Almost as an afterthought, Kristina mentioned that a couple years back, on a subway platform, someone had asked her if he could take a picture of her tattoo, still in progress, for his blog, but she politely declined.

I thought about it for about a second when I smiled and exclaimed "That was me!"

In three years, I've approached a lot of people about their tattoos, and they all blur together.

But I still recall the disappointment I felt at 34th Street, when the woman with the unfinished rooster tattoo from Adorned politely declined my request.

Lucky me, time solved that missed opportunity, and I got to see the finished product, in the bright afternoon soon, years after I had asked.

And it was certainly worth the wait.

Thanks kindly to Kristina for sharing her incredible rooster tattoo with us here on Tattoosday!
Posted by Tattoosday at 6:39 AM