Tattoosday's Trip to Hand of Glory

As alluded to in the previous days' posts, I got a little carried away with a Friday the 13th tattoo experiment and opened up the idea to readers who contributed the funds for a tattoo ($13 special plus lucky $7 tip).

I had seven people send me money (thank you Ginger, Jen, Sean, John, Jenise, Janet and Nicole!) and then vote on the design out of five sheets of flash (seen here).

the flaw in my plan was not collecting the money, but dealing with the votes. I asked everyone to vote for three choices, and assigned 5 points to 1st choice, 3 for 2nd and 1 for 3rd. Fifteen different designs were selected, and only four were selected twice.

The winner was this classic, simple design by Derik Snell:

I was early and first in line, so I got the first tattoo of the day at Hand of Glory's sister shop, down the block, called The End is Near.

Brian Faulk was the assigned tattooer and he made quick work of the design:


The end is result is a little messy, but it should heal nicely: 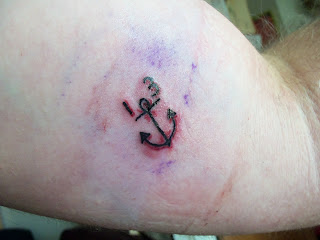 Thanks to all the kind people at Hand of Glory/The End is Near for their help this morning. I am planning on returning later with Melanie for her addition. We'll see how it goes....
Posted by Tattoosday at 1:12 PM