Sailor Jerry on the Rooftop

Saturday night found me on a rooftop in the Gowanus section of Brooklyn watching the film Hori Smoku Sailor Jerry, a documentary about the legendary tattoo artists Norman "Sailor Jerry" Collins. 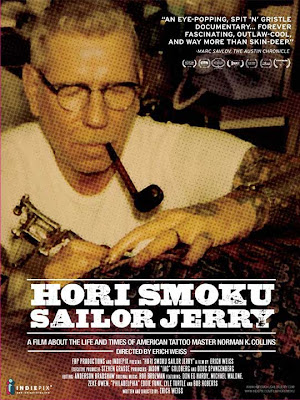 It was part of the Rooftop Films free festival, yet another amazing benefit of living in New York City. That and hearing a guy with a cowboy hat playing "Silent Night" on his harmonica on the subway in August.

A bit about Rooftop Films, what a great program. I encourage everyone in New York to take advantage of (and support) this series, now winding up it's 14th year. The program champions underseen independent films in spectacular locations.

Saturday's show was atop the historic Old American Can Factory. 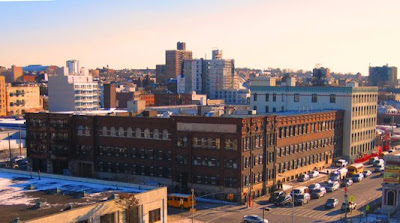 Here was my view, initially: 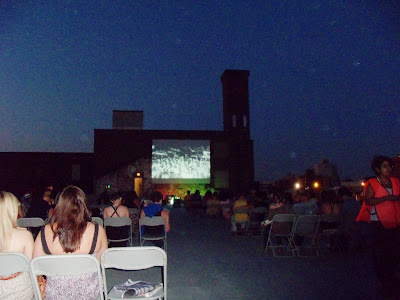 and then when I moved up to the front row: 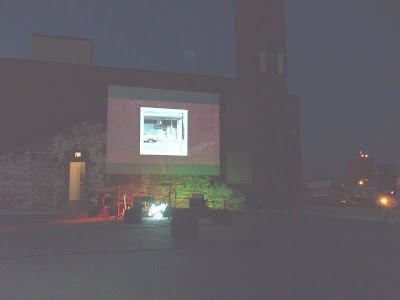 We were treated to some music from a band called Cheeseburger. 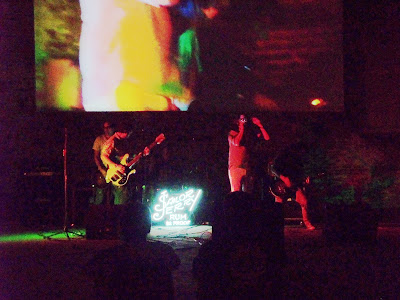 Prior to the film starting, we were introduced to the producer/director of the film, Erich Weiss. He explained that the film has been a three to four year process. It was initially shown at the 2008 South by Southwest Festival and, after a limited theater run, found its way to DVD in late 2009. "I've met a lot of interesting people," he told the audience, and he also asked us not to talk to him after the movie about our own tattoos and the story behind them. Clearly he's heard more than his fair share of tattoo stories.

The film itself was wonderful, and echoed what I consider one of the best tattoo books I've ever read, Sailor Jerry Collins: American Tattoo Master

.Much of the book is the actual correspondence between Sailor Jerry and a young tattoo artist named Don Ed Hardy. The film intersperses snippets from the correspondence, typed out across the screen, with a voiceover representing the artist's voice, with interviews from Don Ed Hardy, along with a veritable Who's Who of Old School tattoo legends like Lyle Tuttle, Mike Malone, Zeke Owen, Bob Roberts, and the scene-stealing Philadelphia Eddie Funk.


Because Sailor Jerry was so suspicious of "outside forces" (i.e. the media), he never gave interviews, and the only exposure we get to him are still photographs and a rare recording of his voice from a radio program.


I found the film doubly interesting because Sailor Jerry was based in Hawai'i, my home state, and I really had an understanding of the Hotel Street area of downtown Honolulu where the tattoo shops were located, and I remember how seedy that part of town was, even as late as 1984. I also loved the one artist speaking pidgin, "Eh brah, wheah da five dollah poke stay?" This, of course, translates to, "Excuse me, where can I go for a five-dollar tattoo?"


The film illustrates the man for who he was, warts-and-all. He was a political conservative who thought Nixon was too liberal. He exhibited what today would be considered racism, but back in the Fifties, Sixties, and Seventies was considered a typical prejudice toward Asians that was molded by experiencing World War II in the Pacific. Yet, through this all shone his artistry and his commitment to the craft of tattooing. The fact that he has been dead for 37 years certainly allows one to focus more on his contributions as an artist, and less on what many would call his shortcomings.


After the film, Erich Weiss did a brief Q and A, with the audience. He seemed to channel a bit of Sailor Jerry, as he continued with his polite rant against people who want to talk about the stories behind their tattoos (sounds like he would not be a Tattoosday reader!). He railed against "tattoo snobbery"  and said he "loves the fact that my tattoos are so shitty".


What Weiss was saying is that tattoos are art and the personal aspects should be just that, personal. He cut his teeth with this film dealing with old school tattoo artists, many who have seen their art form go from an exclusive club to a worldwide fad. About Sailor Jerry, Weiss said, "I think he would have hated what tattooing has become in our society," referring to the tattoo-reality shows and the trendiness of the art form.


The irony of the event being co-sponsored by Sailor Jerry Rum was not lost on me. I could almost see Norman Collins looking down from heaven (or up from hell) and shaking his head at the spectacle.

Speaking of rum, there were free drinks after the event and an after-party in the building courtyard. I had a cup of rum and ginger and looked at some of the beautiful flash that was being displayed in huge frames. My favorite was this one: 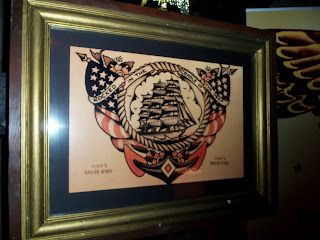 The whole experience was quite enjoyable, but the star of the show was Sailor Jerry. I recommend the movie to anyone interested in the art of American tattoo, and encourage people to check out Rooftop Films and support this amazing program.

Posted by Tattoosday at 6:54 AM