We here at Tattoosday had already decided to continue the Tattooed Poets Project in the "off" months (that is, from May through March, when it was not National Poetry Month), when I received a message from Kimberly Escamilla asking what had happened to the contribution she had submitted back in January.

I slapped palm to forehead when I realized, I had lost someone in the shuffle. The continuation of the Tattooed Poets Project was a perfect chance for redemption.

Kimberly is no stranger to Tattoosday, having participated in the Tattooed Poets Project back in 2011 (here), when she had a different last name. She was kind enough to reach out to me to share again and, also, kind enough to forgive me for overlooking her contribution. So, without further delay, here is the photo she sent along: 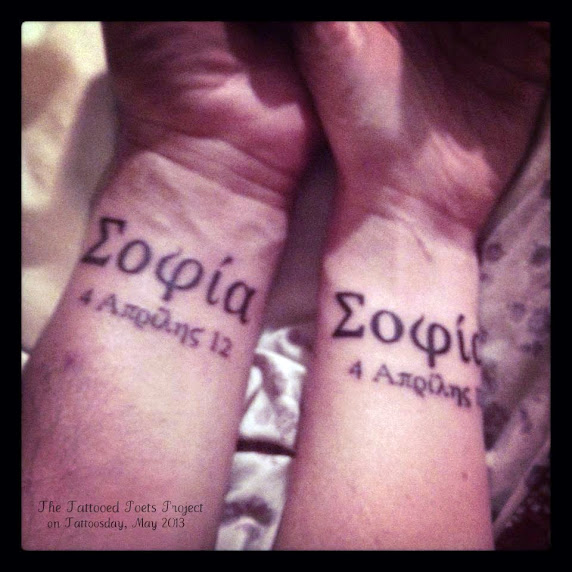 She noted that this tattoo was "not full of fun colors" like her others, but that it was "way more meaningful" to her. She elaborated:


"We lost our daughter Sophia to Trisomy 18. We chose to induce as the disease is most often fatal in the first few months of life. I wrote an article about it here at the Huffington Post. We decided to get tattoos to honor her, and we learned that Mary Joy is open to using the remains of a loved one in the ink. Since Sophia is a Greek name, we decided to have the whole thing done in ancient Greek lettering--It's just her first name and the date we induced April 4, 2012. Mary Joy was able to do the tattoo on August 11, 2012, the day before Sophia was supposed to be born."

I do recommend clicking through on Kimberly's link to the Huffington Post article in the paragraph above. It is a brave and wrenching account of losing a child.

The artist Mary Joy, who is referenced above, is Mary Joy Scott, who works out of Ed Hardy's Tattoo City in San Francisco.

Kimberly sent us the accompanying poem, as well:

The neighborhood bar in North Beach is barren
except for one clutch of retired Italians whose late
lunch has blurred into an evening of beer and gossip.

I know what my husband is going to order before we claim our stools,
before we leave the tattoo shop and walk the three blocks,
before Mary Joy unties the baggie of our daughter’s ashes,
lowers her head and needle, thanking us for trusting her hand
and the ink that would bond Sophia to both of us for life.

Shots of Ouzo, tinged blue, like the inside of ice
are poured neat from a dusty bottle.
The bartender-mother asks why—are you Greek?
We show her our saran-wrapped wrists,
the Hellenic epitaph, knocking-back the first round.

As we savor the sweet anise’s burn, I think of the monks
at Mount Athos who could never have predicted
their pet-project some 700 years later would treat
sour stomachs and jack-knifed hearts around the globe.

The bartender-mother and eavesdropping Italians listen to our saga.
Rapt and teary, they raise their glasses to the purity of grief,
the kind of grief that a tattoo and Ouzo can only begin to admit.

Kimberly Escamilla’s recent work has appeared or forthcoming in Red Wheelbarrow, Plath Profiles, 5AM, DMQ Review, My Baby Rides the Short Bus anthology, Naugatuck River Review, and Cimarron Review. She has taught college-level writing and literature in the San Francisco Bay Area for 19 years and is the director of The International Poetry Library of San Francisco. She lives on the coast, a few miles north of Half Moon Bay, CA with her husband Michael and son Harrison.

We thank Kimberly for sharing these powerful tattoos and poem with us here on The Tattooed Poets Project on Tattoosday.

Posted by Tattoosday at 8:21 AM